Why Do We Sometimes Read a Double Torah Portion?

And when do we double them up? 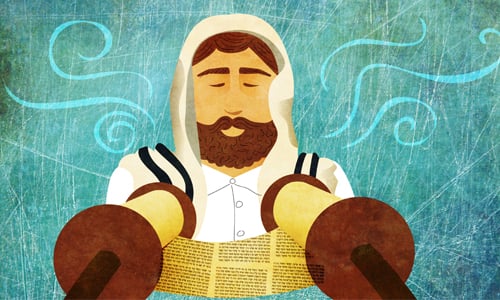 The Torah is split into 54 Torah portions (Parshiyot), and we usually read one Torah portion each Shabbat. However, there are 14 Parshiyot that, depending on the year, can potentially be paired together, so two Torah portions would be read on that Shabbat.

The seven pairs are as follows:

[It should be noted that technically there are really only 53 Parshiyot, with one portion (according to many, Nitzavim-Vayelech) being split into two.1 However, that is beyond the scope of this article, which is focused on how the Torah is currently divided and read. Hence, we will refer to them as 54 separate Torah portions.]

There are a number of reasons why Parshiyot are doubled up, and some reasons specifically apply to certain pairings. Bear with me, because this explanation will get a bit technical.

[Technically we only need 53 Shabbats, since the last portion, Vezot Hab’rachah, is traditionally read on Simchat Torah, which generally (and outside Israel, always) occurs on a weekday.]

In order to reconcile the weekly cycle of Parshiyot with the number of Shabbats available, we need to double up some of the Parshiyot.

In a Jewish leap year, we add an extra month consisting of 30 days, which includes four more Shabbats (or five, depending on the day of the week the new month starts—we will get to this later). Thus, in a leap year we have a lot fewer double Torah portions.

The first four possible pairings are made only in regular years. Since a leap year is four weeks longer, by reading these portions separately we have an extra month’s worth of readings.

Matot-Massei are always read together, even in a leap year, unless it is a leap year and one of the following two scenarios apply:

Although the main reason why we double up Torah portions has to do with leap years, there are additional reasons for pairing them up as well.

In order to to get the Torah readings of the Diaspora back in sync with those of Israel, if Acharon Shel Pesach falls out on Shabbat, then in a regular (non-leap) year, outside of Israel we double up Behar and Bechukotai, while in Israel they are read separately. (In a leap year, we do this instead with the portions of Matot and Massei, as described above.)

If the second day of Shavuot falls out on Shabbat, then in the Diaspora we double up the portions of Chukat and Balak. Thus, Chukat and Balak are only ever paired up outside the land of Israel.

[It should be noted that although we have explained this reason as “synchronizing the reading of the Diaspora with that of Israel,” in truth it is clear, from the very fact that we sometimes wait three months to synchronize the two, that this disparity isn’t really a concern. The real issue is that the Diaspora ends up having one less Shabbat than Israel to read the Torah, and we need to make it up. However, for simplicity’s sake, it is presented as a disparity between Israel and the Diaspora.]

As a rule, the Torah portion of Nitzavim needs to be read on the Shabbat preceding Rosh Hashanah (we will get to the reason for this rule soon). This means that there are only three Torah portions left in the weekly cycle. As mentioned, the Parshah of Vezot Hab’rachah is read on Simchat Torah, leaving the Parshah of Haazinu to be read on a regular Shabbat between Rosh Hashanah and Sukkot. If there is more than one non-holiday Shabbat between Rosh Hashanah and Sukkot, then, and only then, are the Torah portions of Nitzavim and Vayelech separated.4

Why the Lopsided Pairing?

If you’ve been following the schedule of the pairings up until now, you may have noticed a number of interesting anomalies. For instance, in some years we would combine the portions of Matot and Massei, creating the longest Torah reading—a whopping 244 verses!—and yet at the same time we would separate the two shortest portions, Nitzavim and Vayelech—a total of only 70 combined!

Another anomaly is that in leap years when Acharon Shel Pesach falls out on Shabbat, instead of synchronizing the readings of the Diaspora and Israel at the first available opportunity, at Behar and Bechukotai, we wait over three months to synchronize at Matot-Massei.

While this isn’t the place to elaborate on all the intricate rules, we will touch on some of them to help give us an understanding of why the Torah portions are paired up in this specific way.

Before getting to the rules, it is important to point out that the Torah portions aren’t just haphazardly combined. The portions that are chosen to be combined together generally share a theme, although some are more closely related than others.

What are the reasons for these rules? Let’s explore.

Rebuke Before the New Year

The Talmud goes on to explain that this is “in order to end the year together with its curses,” because “Shavuot is the beginning of a new year.” As the Mishnah explains, “The world is judged on Shavuot for fruit.”

Tosafot explains that although we read the curses before the new year, we nevertheless don’t want to go straight from curses into the new year, so we have a buffer. As a rule, we always read Nitzavim before Rosh Hashanah, and the portion of Bamidbar is always read before Shavuot.7

Based on this, we can understand that simply combining the two smallest portions of Nitzavim and Vayelech is not always an option, as it can cause Nitzavim to be read after Rosh Hashanah.

While this answers why we can’t always just combine the two shortest Torah portions of Nitzavim and Vayelech, we are still left with the question why in some years we wait a whole three months to get the Diaspora in sync with Israel. The question is compounded by the fact that we actually skip some possible opportunities of reconciling the two (such as combining the portions of Chukat and Balak, as we sometimes do) and instead wait until Matot-Massei.

Hope in the Saddest of Times

To answer this, we need to explain one more rule: we always read the Torah portion of Va’etchanan on the Shabbat following the fast of the 9th of Av.8

Based on this, on a simple level, some explain that since the two portions that are the most commonly read together are Matot and Massei, if we are faced with a choice of combining two portions, we just pick these two most common ones. Indeed, these two portions fit together better than many of the other pairs, since both talk about dividing and inheriting the land of Israel.9

Others explain that there is a much deeper reason for this.

Reading these three Torah portions at the time we mourn the destruction of the Temple and the exile from the land of Israel gives us hope that we will ultimately return and redivide the land with the ingathering of the exiles and the coming of Moshiach.10 May it be speedily in our days!

FOOTNOTES
1. See Zohar 1:104b, Tikkunei Zohar 29b (tikkun 13); Siddur of Rabbi Saadiah Gaon, Keriat ha-Torah; Abudraham, Seder ha-Parshiyot. See also Likkutei Sichot, vol. 19, p. 298.
2. There is one scenario in which Vayakhel and Pekudei are read separately in a regular year: in a year in which Rosh Hashanah falls on Thursday and Passover on Sunday.
3. The extra day of Shemini Atzeret—called Simchat Torah—is not an issue in this regard, since it can never fall on Shabbat.
4. Shulchan Aruch, Orach Chaim 428:4.
5. According to some, the rule is that “the portion of Devarim is always read before the fast of the 9th of Av.” Practically, however, it is the same rule.
6. Talmud, Megillah 31b.
7. Tosafot on Talmud, Megillah 31b.
8. Shulchan Aruch, Orach Chaim 428:4.
9. Responsum of Maharit 2:4, cited in Magen Avraham on Shulchan Aruch 428:6.
10. Bnei Yissaschar, Chodshei Tammuz-Av, Maamar Beit.
As taken from, http://www.chabad.org/library/article_cdo/aid/3779325/jewish/Why-Do-We-Sometimes-Read-a-Double-Torah-Portion.htm#utm_medium=email&utm_source=78_rabbi_y_en&utm_campaign=en&utm_content=content  September 14, 2017

Posted by yishmaelgunzhard on September 14, 2017 in Uncategorized