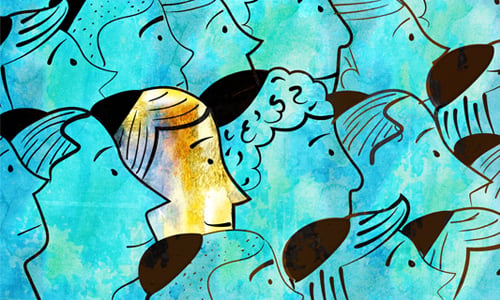 Today, we live in a thriving world of over seven billion people, with fewer casualties of war, less poverty, longer and healthier lives than ever before in recorded history. Technology and medical breakthroughs continue to press forward, along with global commerce and communications.

But this progress is possible only because of humanity’s common values. And it is good only when we stick to those values. We value medicine only when we value life. Commerce benefits everyone only when people keep their word. Technology is beneficial only when we use it to build a kinder, fairer world with greater freedom and opportunities for all. And global communications is of value only when we want to share our ideas and collaborate with one another.

Here are some examples of Jewish values that contribute to a better world:

It’s a very big world, and yet no two people are alike. No two people think alike, look alike or live the same life. Yet the Jewish Torah declares something very radical: that every human being is created in the likeness of G‑d.

Adult or child, man or woman, rich or poor, capable or handicapped, a member of your tribe or a foreigner—the Author of the Universe breathes within each one of us. Each human being is a representative of the Creator within His creation, each in his or her unique, irreplaceable way. Which means that the life of each person is sacred.

That is the only measure we have of a human life: Each one is worth the entire world.

A city is under siege and the enemy declares, “Give us one of you, and we will leave you alone.”

What is the right thing to do?

For much of the 20th century, world powers were locked in struggle. It was not just a struggle for power; it was a struggle of ideologies.

On the one side were those who believed that the good of the state overrides the rights of the individual. A person could be stripped of all he had, and entire communities could be exterminated if that benefited the state.

On the other side were those who believed in the right of every person to life, to justice, to ownership of property, and to decide how and where to live.

The experiment of the 20th century has shown clearly that the Torah way is indeed the only way that society is sustainable.

Abraham, father of the Jewish People, believed so strongly in justice that he even took G‑d to task over it. G‑d informed him that He was going to destroy the sinful cities of Sodom and Gomorrah. Abraham argued, “What if there are some righteous people in those cities? Shouldn’t you save the cities for those righteous people? Will the Judge of all the earth not do justice?”

Justice is really G‑d’s job. He created the world, and it’s up to Him to ensure it runs fairly. And so it is a great privilege that He makes us partners in this divine and vital task.

“Justice, justice, you shall pursue!” G‑d commands us in the Torah. And as the Jewish sages taught, “The world endures because of three things: justice, truth and peace.”

To a Jew, seeking justice is a way of seeking G‑d. On the morning of Yom Kippur, the holiest day of the Jewish calendar, Jews read from the prophet Isaiah what G‑d requires of them: “to loosen all the bonds that bind men unfairly, to let the oppressed go free, to break every yoke. Share your bread with the hungry; take the homeless into your home. Clothe the naked when you see him, do not turn away from people in need.”

Fixing Up the World

Can human beings make the world a better place?

For most of history, wise people laughed at this notion. Many considered this world a dark and cursed place. No one imagined that we could make permanent and lasting change. Everything, they said, goes in cycles. Sometimes good prevails, sometimes evil.

But the Torah of the Jews sees all of time as a story, working towards an era of peace and wisdom here on earth. It is the duty of every person to leave the world behind better than he or she found it. All of us, in our actions, are builders of a world to come.

Jews call this idea tikun, which means to fix up the world—to make it even better than its Creator made it.

G‑d created this world out of love. He loves this world, and He sustains all its creatures with love. And the greatest gift of love He can give us is the opportunity to partner with Him in the creation of the world, by setting it straight and bringing it into harmony.

Learn more: What Is Tikkun Olam?

The Land of Israel and the Global Community

Israel is the land of the Jewish People. It was promised to them by G‑d as an everlasting inheritance. The books that all Christians and Muslims consider holy concur on this point.

Yet at the same time, G‑d also told the Jewish People that they must respect the stranger among them. Even if that person does not keep their rituals and is not a member of their tribe, the stranger must be treated with dignity, and Jew and non-Jew alike are responsible to keep the basic laws incumbent upon all human beings.

In the 16th century, Europe was torn by wars of religious intolerance. People thought that those who disagreed with their beliefs were heretics and must be converted or killed. It wasn’t until they looked back into the Torah—the Hebrew Bible—that they realized this is not the way. G‑d wants us to make peace with one another, and that is only possible when we accept each other’s differences.

Among Jews, there are always many different opinions. Jews love to debate important issues. They know from long experience that only through a wide variety of views and lively debate can we find the truth. Indeed, the Talmud, one of the most studied Jewish texts, and (along with the Bible) the foundation of Jewish law, is a compilation of arguments of the sages.

People must keep the law of their country, and accept that there is one final authority, the Author of the entire world. But to force everyone to be the same runs counter to G‑d’s plan for a diverse and beautiful world.

What difference does it make whether people have one G‑d, many gods, or no god at all? Can’t we rely on human reason and instinct to guide us to live in peace with one another?

To this question, history provides a resounding “No.”

This is especially so after the 20th century, when the most educated nation on earth, one that prided itself on its achievements in science, culture, philosophy and ethics, committed the most horrific crimes against humanity. They did so not out of a fit of insanity or revenge, but with the rationale of what they considered pure science. Millions of innocent people were worked or gassed to death, simply because they were considered inferior.

Human nature and human reason are not inherently evil. Human beings naturally care for one another and are outraged by injustice. Human reason has produced a wealth of wisdom.

But the human mind is easily bribed. When morality becomes inconvenient, we find ways to dismiss it. When ethics get in our way, we find reasons to change the rules of the game. And when it comes to people who are outside of our clan, tribe or society, we simply determine that they are not human like us, and everything is justified.

That is why it is vital, especially today in a global society, that we accept a single Authority, one who is neither human nor elected by humans, and whose word is eternal and immutable.

Is peace better than war?

It’s hard to believe, but not long ago most people thought war was a great enterprise. It was the way men showed their strength and nations demonstrated their power. People who protested war were generally considered foolish crackpots.

But more than 2,600 years ago, the Jewish prophets Isaiah and Micah prophesied of a time when nations would choose never to go to war again and the world would be filled with peace.

It wasn’t until the close of the First World War that people began to understand that humanity, with its vast new arsenal of technological weapons, could no longer afford to go to war. After the Second World War, the nations of the world built a great structure—the United Nations— where they would sit and discuss peace instead of war.

On a wall in the United Nations Headquarters complex are engraved the words of Isaiah and Micah: “They shall beat their swords into plowshares, their spears into pruning hooks; nation shall not lift the sword against nation, neither shall they learn war anymore.”

May that time come very soon, sooner than we can imagine.

View all posts by yishmaelgunzhard