Written in encrypted ancient Hebrew, one of the last unpublished Dead Sea Scrolls has finally been deciphered by a University of Haifa post-doctoral researcher. According to Dr. Eshbal Ratson, the almost impossible year-long mission was like “putting together a jigsaw puzzle — without knowing what was the picture.”

Using hi-tech images provided by the Israel Antiquity Authority’s Leon Levy Dead Sea Scrolls Digital Library, Ratson, 38, spent countless hours in front of her computer manipulating, deciphering and joining the 60 minuscule “puzzle pieces” which now form a comprehensive “calendrical scroll,” a document which outlines the intricate mathematical computations used by the Qumran sect to set the rhythm of their year and way of life.

Its discovery is being hailed by scholars this week as “important” and “exciting.” 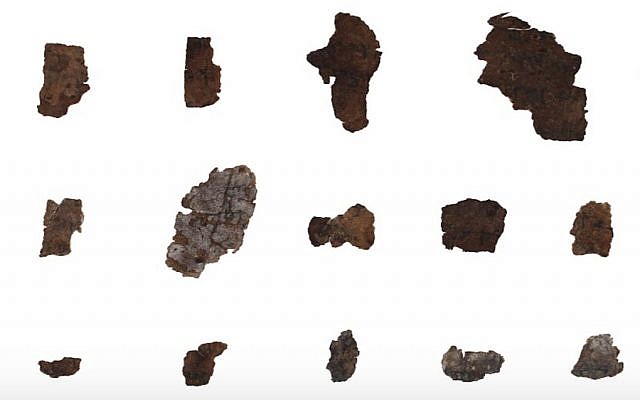 Inset of Plate 240 of fragments written in Cryptic A script from Cave 4 at Qumran.
(Shay Halevi, Israel Antiquities Authority, The Leon Levy Library of the Dead Sea Scrolls)

“It is important on a number of levels.” 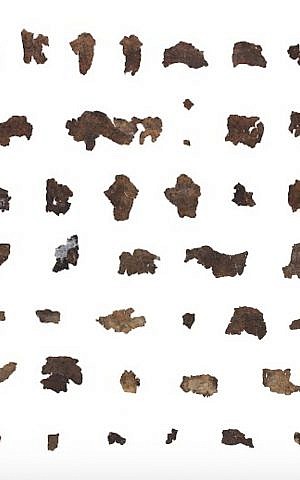 Plate 241 of fragments written in Cryptic A script from Cave 4 at Qumran. (Shay Halevi, Israel Antiquities Authority, The Leon Levy Library of the Dead Sea Scrolls)

The monumental deciphering of this scroll, the second to last of the cache of more than 900 scrolls discovered near Qumran in Israel’s Judaean Desert beginning 70 years ago, could only have been completed with new digital technologies, said Ratson.

What was revealed moves forward the scholarship in a number of disciplines: In addition to the technical aspects of the sect’s calendar, the contents of the scroll, written primarily by one scribe with occasional corrections and notes by another, confirm Hebrew linguistical assumptions, including the earliest use of the word “tekufa” for a festival or holiday at the change of the season, and is a rare mention of a little known “Feast of Wood Offering.”

Beyond mathematical calculations and linguistics, however, the scroll also opens a window into the very human power struggles during the 150 years of Qumran settlement during Second Temple Period, when the tiny sect rebelled against the religious authority wielded by Jerusalem’s centralized calendar-controlling priestly class.

Ratson’s preliminary conclusions were recently published in a Journal of Biblical Literature article, “A Newly Reconstructed Calendrical Scroll from Qumran in Cryptic Script,” which she co-authored with her supervisor, Prof. Jonathan Ben-Dov, the head of the Haifa Project for Research on the Dead Sea Scrolls.

Ratson perhaps more than anyone is surprised by the results of her intensive work. During a lengthy conversation with the Times of Israel, Ratson said she assumed she was undertaking technical busy work. “But the puzzle came into being and I realized that I had something in hand.”

Extremely fragile, the scroll’s 60 fragments were grouped together decades ago with other encrypted Hebrew fragments and assembled on plates by early Dead Sea Scroll researchers. One, the Catholic priest Józef T. Milik, felt the fragments came from one scroll. The other, Stephen J. Pfann, thought they came from six different scrolls. Unfortunately, neither of the researchers left notes on their work, but Ratson said she took cues from how the fragments were laid out on the plate.

The scroll’s dark brown parchment fragments range in size from 3.9 cm × 2.8 cm for the largest fragment to numerous small pieces no larger than 1.5 cm × 1.5 cm. Ratson said she used a photo processing program similar to Photoshop to enlarge and manipulate the slivers of words.

Slowly, as Ratson shifted and joined fragments on her computer screen, she noted a very long, twisting and turning marginal note that she said “was key for deciphering the scroll.” 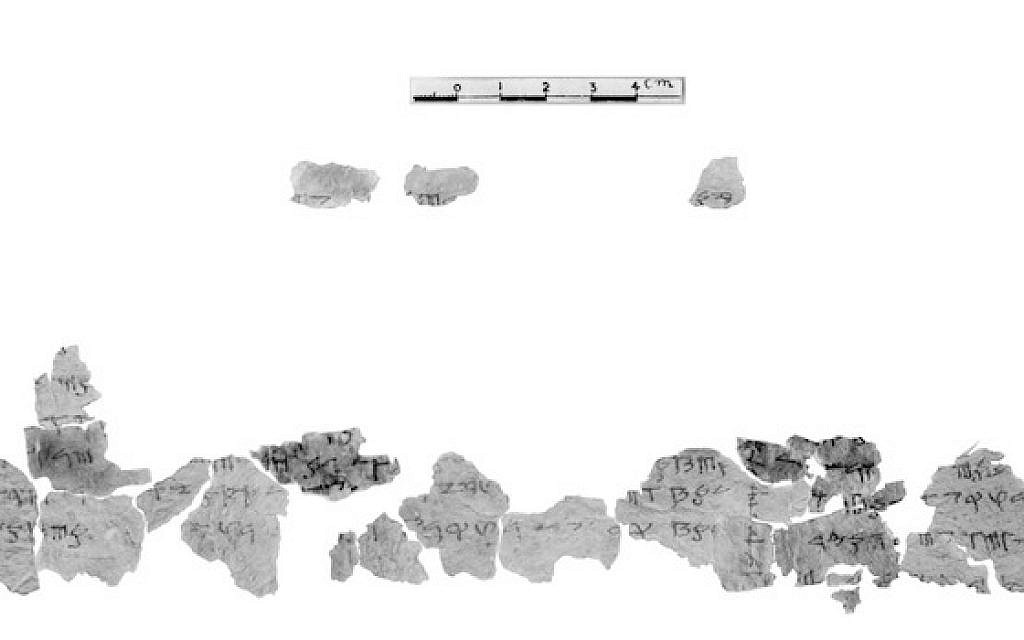 The reconstructed Dead Sea Scroll in infrared (University of Haifa)

The note, which is a detailed account of how to observe the esoteric Feast of Wood Offering, was broken in about six fragments. It began between two columns, but suddenly, the direction of the writing shifted, causing her to wonder whether it was indeed the same comment. In the Haifa labs, doctoral student Asaf Gayer suggested that perhaps the scribe merely ran out of space between the columns and so changed direction.

Based on Gayer’s comment, she reassembled the pieces of the margin note’s two-direction writing. This allowed Ratson to connect pieces of different columns, creating more cohesion in the swiss-cheese-like text.

“Sometimes you need the beginning and then it runs,” she said.

Ratson estimates the 60 assembled fragments are only about half of the original scroll. However, since the text follows a formula well-known from other calendar scrolls, she feels she was able to convincingly reconstruct the text based on half-words or suggestions of sentences.

“Once you get a few full sentences you, you can guess all the rest of it,” said Ratson. “If you think of a puzzle, when we started, we didn’t have the picture, but after a while we knew what to expect, so knew how to put the pieces together.”

In general, Tel Aviv University’s Mizrahi accepts Ratson’s big-picture textual reconstruction, but adds that since most of the formulaic language is also based upon incomplete fragments, there may be holes.

“We always have to be cautious about a textual reconstruction, but this particular genre is very formulaic,” said Mizrahi. “The reconstruction is relatively safe, but keep in mind that it is schematic and can never be accurate,” he said. The reconstruction can give the reader a rough idea, but finding a mismatch or disparity here and there would neither surprise the scholar, nor take away from the whole picture.

This scroll, as well as some eight other Dead Sea Scrolls, is written in what scholar Milik labeled “Cryptic A script.” Deciphered in the 1950s, the script is a replacement code, said Ratson. The scribe would replace Hebrew letters with other letters from the alphabet, or special signs, including upside down letters or symbols that are similar to Greek or paleo-Hebrew letters, she said. “It’s quite a simple encryption… the language itself is Hebrew.”

Ben-Dov hypothesizes that the encryption is “a matter of prestige.” Mizrahi agrees, saying “writing in esoteric script had some kind of a social function. It makes one feel very important to read stuff that others can’t.”

At the same time, said Ratson, everything that has been deciphered that was written in Cryptic A has been found unencrypted as well, leaving scholars to continue to puzzle over its use.

The margin note which spurred Ratson to crack the scroll’s riddle was about the Feast of Wood Offering. It is mentioned in the Bible in Nehemiah (13:31), “and for the wood-offering, at times appointed, and for the first-fruits,” but is an almost-unknown holiday in rabbinic literature. 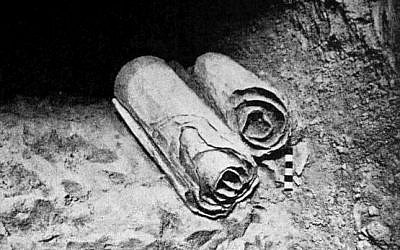 Two scrolls from the Dead Sea Scrolls lie at their location
in the Qumran Caves before being removed for scholarly
examination by archaeologists. (public domain via wikipedia)

The controversy, he said, is really about the proper conduct of the Jerusalem temple cult — “which is a much more complicated polemic of the religious life of the period,” said Mizrahi.

The intricate calendar detailed in the scroll is based upon a symmetrical 364-day system. According to the article, “Members of the Yahad [Qumran sect] adhered to a year of 364 days, which was different from the luni-solar year of the Jerusalem temple and the Hasmonean state… The number of 364 days is neatly divided by seven, a typological number with signiﬁcant religious connotation. Each 364-day year contains exactly ﬁfty-two weeks, a fact that allows anchoring the festivals to fixed weekdays, thus avoiding their coincidence with the Sabbath. In addition, the number 364 divides neatly by four as well, yielding a good symmetry of the four seasons, each season containing exactly 91 days.”

There’s just one problem: the calendar completely ignores the natural property of the earth’s rotation around the sun in 365 (and a quarter) days a year, and so within a few decades, seasons would have shifted entirely from their natural rhythm.

But the principle behind the sect’s obsession with their calendar and its calculations is very instructive for appreciating the Jerusalem temple’s social control — and the sect’s rebellion from it. Case in point, the margin note on the Feast of the Wood Offering, which in rabbinic literature is spread over nine days throughout the year, but in Qumran was observed for six days at the end of the year.

“The calendar seems like a technical aspect of this scroll, but is in fact a very significant subject,” said Ratson. “We think of time as a way to coordinate peoples’ activities in society, but actually it is a very political thing. This particular calendar is probably one of the reasons for the establishment of the sect, one of the reason that they left the temple,” she said. 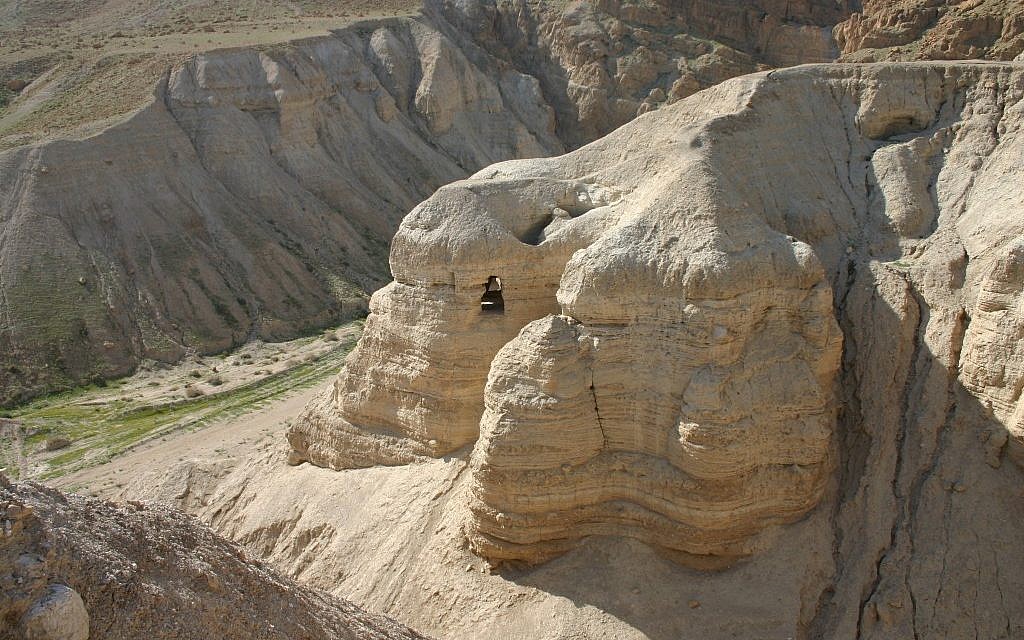 Ratson postulated that the calendar is a corner stone in the difference between the sects “because anyone who rules the calendar rules the cult in the temple.” And he who controls the temple, rules the connection with Diaspora Jewry and the economy: citizens pay taxes according to the calendar.

“He who rules the calendar, rules every aspect of life,” said Ratson. The sect in Qumran wouldn’t accept such a man-made authority. “Their calendar is already set from the beginning of creation; it is the calendar that God has decided upon.”

Revealed by angels, “this calendar is perfect,” said Ratson, and removed conflicts that arose in the normative rabbinic calendar when, for example, festivals fell on the Sabbath, causing penitents to wonder which takes precedence. In Qumran, as the seasons shifted, the members of the sect blamed the “sinful stars,” joked Ratson, not their “perfect calendar.”

Outside of the Qumran writings, the 364-day calendar has all but vanished from history. 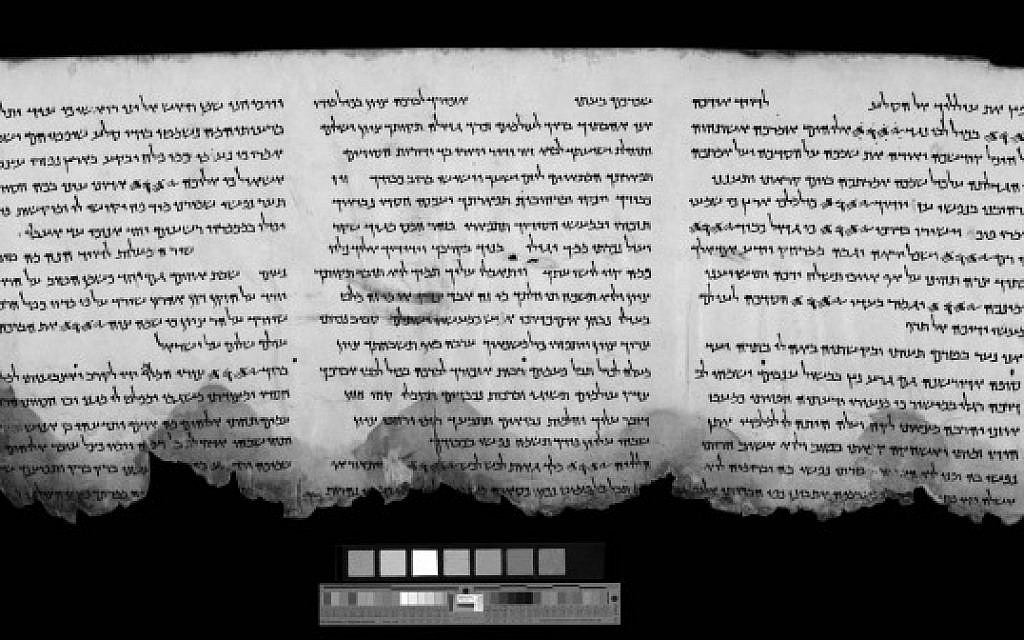 An infrared image of a section from the Book of Psalms found at Qumran.
The words in the fragment’s dark lower margin were rendered visible by the
IAA’s imaging equipment, first developed for NASA (Courtesy of the Israel Antiquities Authority)

“Every new text tells us something about this very rich and complicated picture of religious and intellectual life,” said Mizrahi. “It is gratifying to see how tiny fragments can nonetheless be so meaningful.”

Ratson is now working on the second unpublished Dead Sea Scroll — a calendrical astronomical scroll — which is also written in Cryptic A.

But whether it is truly the last unpublished scroll is yet to be seen. Over the past year, researchers at the IAA’s Leon Levy Dead Sea Scrolls Digital Library discovered several boxes of previously unsorted fragments from Qumran’s Cave 11 in the IAA scroll storeroom. According to a recent newsletter put out by the Hebrew University’s Orion Center for the Study of the Dead Sea Scrolls and Associated Literature, “For the most part, these boxes have never been systematically examined by scholars and the fragments have never been imaged.”

One IAA researcher, Oren Ableman, went through a box and removed 82 fragments in relatively poor condition. “In some cases, enough script could be deciphered to read full words and even to identify the manuscripts to which the fragments probably belonged,” according to the newsletter.

Ableman’s work, as well as a joint IAA-government initiative to survey for more Dead Sea Scroll caves, is ongoing — and eagerly anticipated.

Posted by yishmaelgunzhard on January 24, 2018 in Uncategorized