RSS
← The Challenge of Yitro. Would you Convert?
¿Tiene Di-s un lado femenino? →

Why Do Torah and Haftarah Have Different Trope? 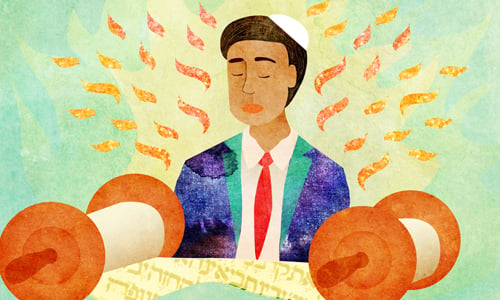 Trope (trop in Yiddish) is the tune used when Torah reading and other texts, based on a cantillation marks.

Most communities use six different kinds of trope throughout the year:

Are They Really Different?

Besides for telling us how to sing, the cantillation marks are considered part of the Oral Torah

since they give syntax and structure to the verses and actually affect the meaning of the verses read.2

be understood through the cantillations.3

Although these six tropes all sound different, the cantillation marks all serve the same

function as far as syntax and meaning is concerned. They only differ with regard to the

clef and tempo they are sung in. 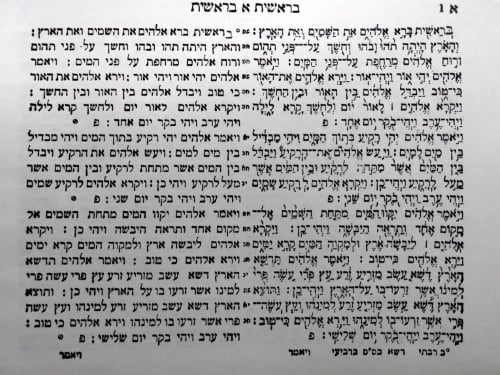 A page of a Tikkun printed in Berditchev, which displays the text with cantellation
marks alongside
the same text with no markings at all, used as an aide to Torah readers
(from the private collection of Menachem Posner).

So why are they different? Rabbi Moshe Sofer (known as the Chatam Sofer) writes: “Clefs that the

cantillations are sung in are dependent upon the nature or occasion of the reading. Thus, for the

reading of Eicha the text is read in a more sorrowful pitch, while Megillat Esther is more joyful.”4

But there is more than just mood. Rabbi Judah the Pious (1150-1217) writes that there is an ancient

tradition that the Torah, Nevi’im (Prophets) and Ketuvim (Writings) are each sung in their own

unique pitch, and one may not read Torah in the tune of the Prophets or vice versa.5

tunes that the Levites sung in the Holy Temple, which they composed based on the sounds of the

In fact, the cantillations were held in such reverence that the Talmud says that one should not

The Books of Emet 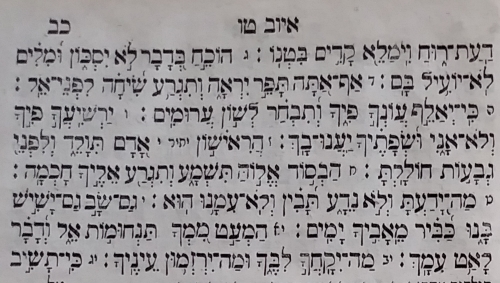 A detail from an edition of the Book of Job, printed in Warsaw in 1861, which displays the text with the
cantillation marks unique to the Books of Emet
(from the private collection of Menachem Posner).

Although for the most part the cantillations only vary by tempo and pitch, there are three (out of the 24)

books of Scripture that do indeed have an almost entirely different cantillation system with separate rules.

These are the books of Iyov (Job),8 Mishlei (Proverbs) and Tehillim (Psalms). In Hebrew, their names

form the acronym of “EMeT,” which means “truth,” and they are collectively known as Sifrei Emet,

Why do they have their own system?

As we mentioned, there are deep secrets hidden in the names and sounds of the cantillations, rooted

in the songs of the Holy Temple. Let us hope and pray for the day when the Temple will be rebuilt

and the meanings of these songs will be fully understood.12

Footnotes
1. There are parts of the Torah that are read with different tunes such as the song of the sea, as well as
the Ten Commandments, which have two sets of cantillations (ta’am eliyon and ta’am tachton). For
the purpose of this article, they are all included in the general Torah reading.
2. See Zohar 2:205a; Zohar Chadash, Shir Hashirim 73b.
3. See, for example, Rabbi Moshe Cordovero—Ramak, Shiur Komah 8.
4. See repsonsum Chatam Sofer, 6:86.
5. Sefer Chassidim 302; he refers to their unique tunes as well as the prohibition of not
switching tunes as “tradition from Sinai.” See, however, the Chida in his commentary
Brit Olam ad loc., where he explains that it does not necessarily mean that the tunes
of the Prophets and Writings were literally from Sinai.
6.Rabbi Shimon ben R’ Tzemach Duran; Rashbatz, in Magen Avot 3, “Hameyuchad
L’Techiyat Hameisim,” ch. 4 (p. 384 in Haktav edition).
7. Talmud, Berachot 62a and Rashi ad loc.
8. While most of the book of Job has unique cantillation, ch. 1-2 and the end of Job
have the regular cantillation.
9. Tosafot, Talmud Bava Batra 14b; see also Mesechet Sofrim 12:11-12.
10. Tosafot Hashalem on Genesis 1:1 no. 74; see there where it explains that the last
letters of the first three words of the Torah are an acronym for these three
books בראשית ברא אלוקים is an acronym for תהילים איוב משלי
11. Rabbi Yehuda Hachassid in Sodei Chumash, Likutim, Sodei Iyov (p. 111).
12. See Shiltei Hagiborim, Rabbi Avraham Harofeh, Ma’mer Haloshon (p. 602 in Machon Yerushalayim edition).
As taken from, http://www.chabad.org/library/article_cdo/aid/3923198/jewish/Why-Do-Torah-and-Haftarah-Have-Different-Trope.htm#utm_medium=email&utm_source=78_rabbi_y_en&utm_campaign=en&utm_content=content

Posted by yishmaelgunzhard on February 1, 2018 in Uncategorized

← The Challenge of Yitro. Would you Convert?
¿Tiene Di-s un lado femenino? →