Will new conversion bill help 400,000 Israelis of ‘no religion’? Not likely 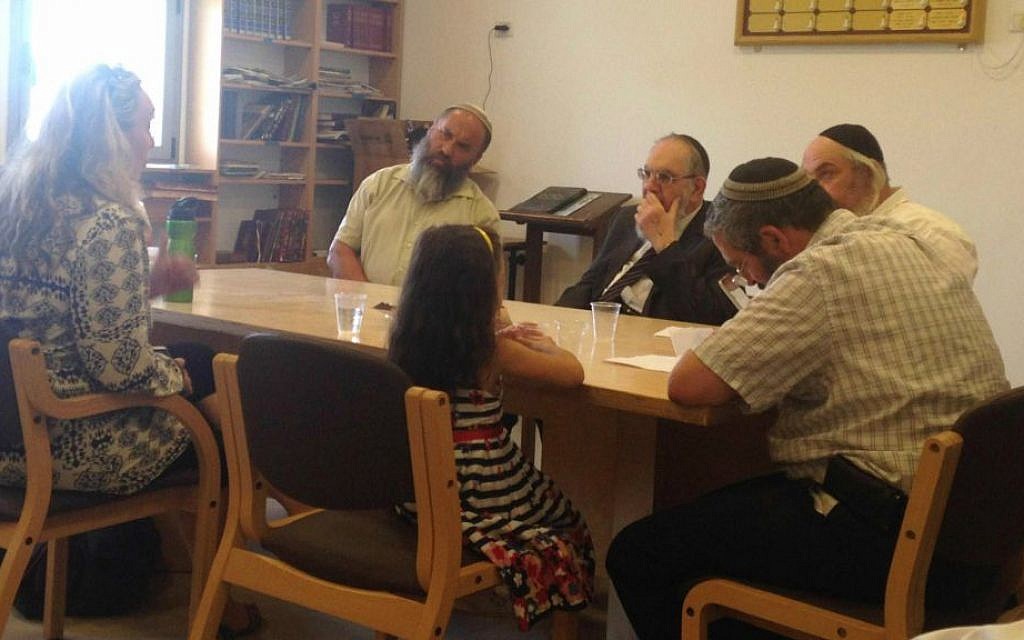 Some 600 recent converts to Orthodox Judaism are caught in the crossfire as the Israeli government drafts legislation aimed at outlawing the Orthodox rabbinical court — endorsed by High Court of Justice — that converted them.

The converts, mostly children of immigrants from former Soviet Union countries, are among the 400,000 Israelis currently held in limbo in the Jewish state, categorized as having “no religion”; they cannot marry or be buried according to the faith of their fathers.

According to a recent Haaretz report, a bill drafted by Moshe Nissim, a former justice, finance, and industry minister, would make conversion a uniform process under the auspices of a stringent state-authorized Orthodox body. This law would directly oppose a 2016 High Court ruling that decided that the conversions of private rabbinical courts should be officially recognized by the state.

One of the “more troubling” clauses in the draft legislation also addresses how conversions may be revoked, according to a source close to the issue. It is still unclear whether this clause would be used against the hundreds of Israelis who have been converted in private Israeli Orthodox courts.

The language of the bill is not final and Nissim, who served as a member of Knesset on and off from 1959 to 1996, mostly for the Likud party, is continuing consultations with major Jewish thinkers, including Jewish Agency head Natan Sharansky, whom he is set to meet in the coming days.

The law, one of several attempts to legislate conversion, comes on the heels of several High Court cases which have slowly broadened the state’s definition of who is a Jew — and therefore who is eligible to become an Israeli. 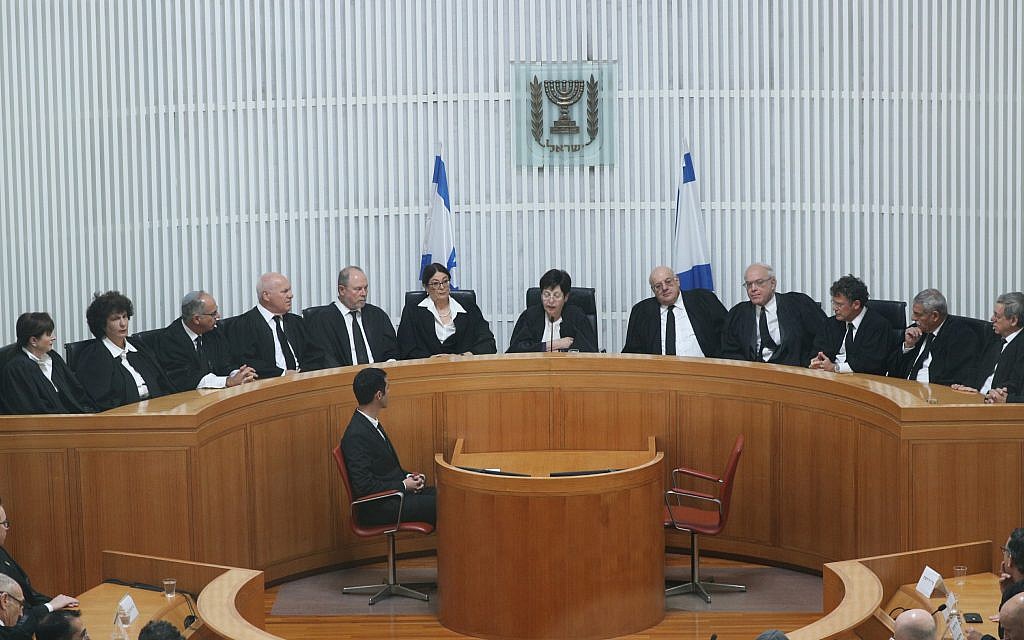 In March 2016, the High Court decided that non-Israelis who were converted in Israel by private, mostly ultra-Orthodox, rabbinical courts outside of the Israeli Chief Rabbinate could seek Israeli citizenship.

A full plenum of judges heard from the representatives of four defendants from three cases, one in 2006 and two in 2011, in a combined petition against the Interior Ministry, the population registry, the Conversion Authority (through the Prime Minister’s Office) and the immigration authority. Joining as respondents were Israel’s Reform and Masorti movements, and the World Union for Progressive Judaism.

In then-court president Miriam Naor’s decision, she wrote that a broad reading of the 1950 Law of Return is essential for the State of Israel to maintain its Jewish and democratic natures. At least for secular civil purposes, she wrote, the Chief Rabbinate of Israel cannot be the only recognized auspices for conversion.

“The people of Israel are indeed one people, but spread out in all the corners of the globe, and made up of many communities, with different shades and variations within those same communities. Therefore, the Law of Return reflects, in addition to the promotion of aliya, also the purpose of maintaining the unity of the Jewish people in the Diaspora and Israel,” wrote Naor.

The court therefore decided that if the converting individuals were legally residing in Israel, their conversions are considered valid for consideration for citizenship under the Law of Return.

The Law of Return stipulates that any individual who has at least one Jewish grandparent, or has converted in a recognized court outside the State of Israel, may apply for citizenship. The Law of Return does not, however, provide for such a citizen’s automatic recognition as Jewish by the Israeli Chief Rabbinate.

In the wake of sensitivities following the freeze of the Western Wall pluralistic prayer platform compromise, Netanyahu shelved the conversion bill for six months and tasked Nissim with finding a palatable solution. 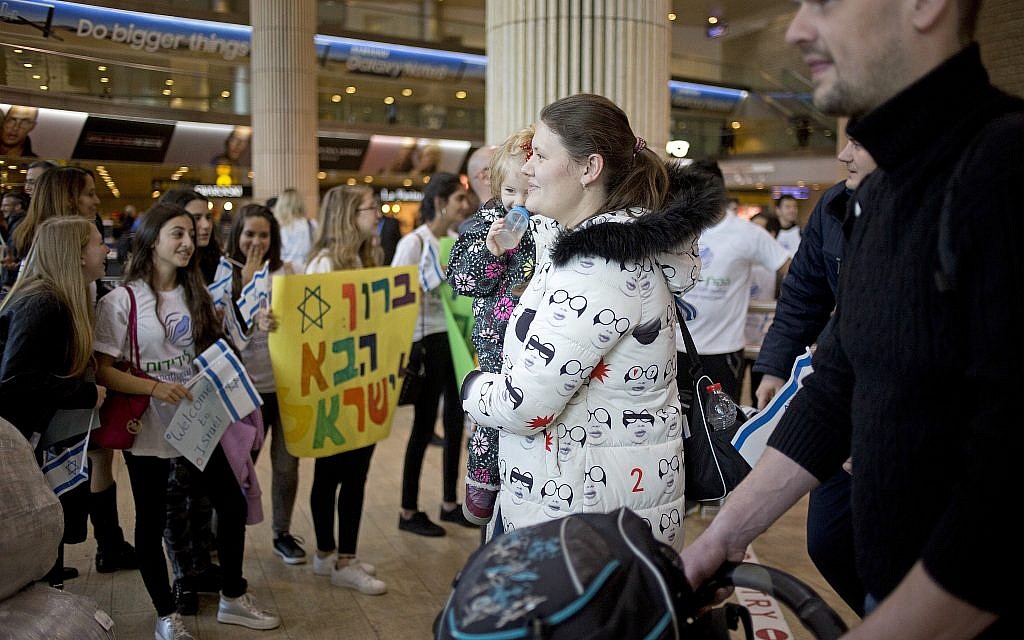 In this January 30, 2018 photo, new Jewish immigrants from Ukraine arrive on a flight funded by the International Fellowship of Christians and Jews at Ben Gurion airport near Tel Aviv, Israel. (AP Photo/Ariel Schalit)

The March 2016 case is potentially landmark in that it paves the way for recognition of private conversion courts, as well as domestic Israeli conversion as a path to citizenship. However, its greatest significance is for the growing number of Israel’s 400,000 citizens who immigrated and became citizens under the Law of Return but are registered as having “no religion.” Now, they would have a choice of means to convert to Judaism.

Increasingly feeling shut out of the state conversion program but still seeking an Orthodox conversion, over 600 of these Israelis have turned to a relatively new initiative called Giyur Kahalacha (a pun in Hebrew, meaning both “conversion as it should be” and “conversion according to Jewish Law”). The state rabbinical courts annually convert some 2,000 people to Judaism.

One of the converts named in the 2016 High Court case was represented by the nonprofit group Itim, which was founded in 2002 by American immigrant Rabbi Seth Farber to aid individuals in negotiating the state’s religious bureaucracy. (Itim currently has a case in a Jerusalem municipal court calling for the implementation of the High Court’s 2016 decision. Farber said it is being delayed as the court awaits the state’s conversion legislation.) 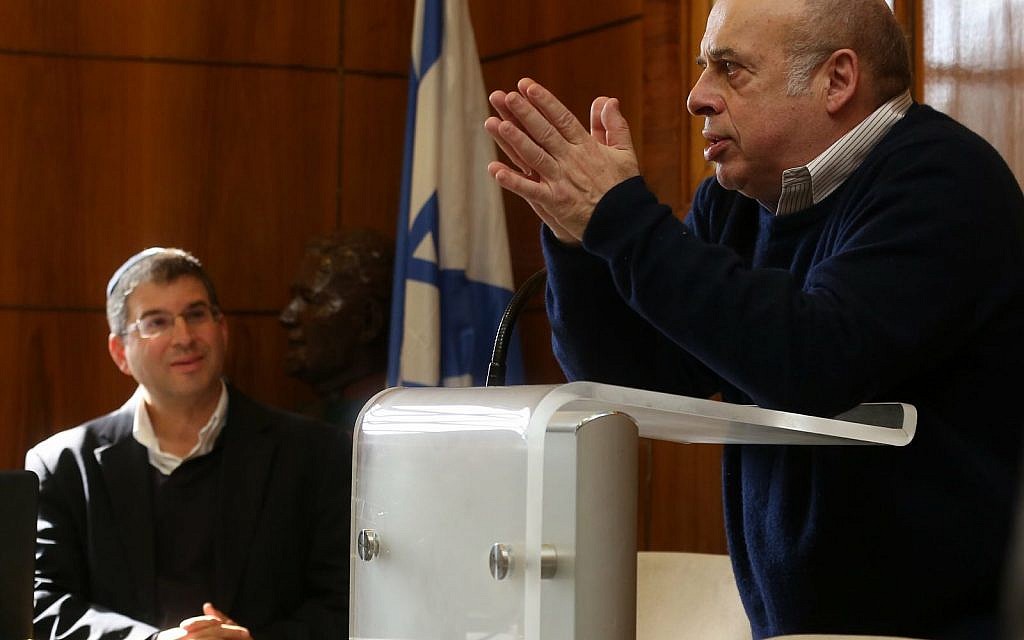 The process of converting through the more tolerant courts of Giyur Kahalacha, wrote Farber in a Times of Israel blog, “represents an opportunity for families who once were persecuted for being Jewish to fully realize their Jewish identities in the Jewish homeland.”

Farber explained: “Israeli citizens with ‘no religion’ are unable to marry in state-recognized Jewish weddings (the Chief Rabbinate has exclusive legal authority over Jewish marriages in Israel), and their children will be unable to prove their Jewishness or to marry as Jews in Israel.

“More than half of all immigrants to Israel in 2017 were from Russia and the Ukraine; 75% of them are now lost in the ‘no religion’ bureaucratic void.”

The conversions of these citizens with “no religion” through Giyur Kahalacha would not, however, be recognized for purposes of Jewish status by the rabbinate, which overseas all life cycle events, including marriage, divorce and burial. Therefore, even if a private court’s convert may register as Jewish in the Interior Ministry and even become a citizen of the State of Israel, he still would not be considered Jewish by the rabbinate. 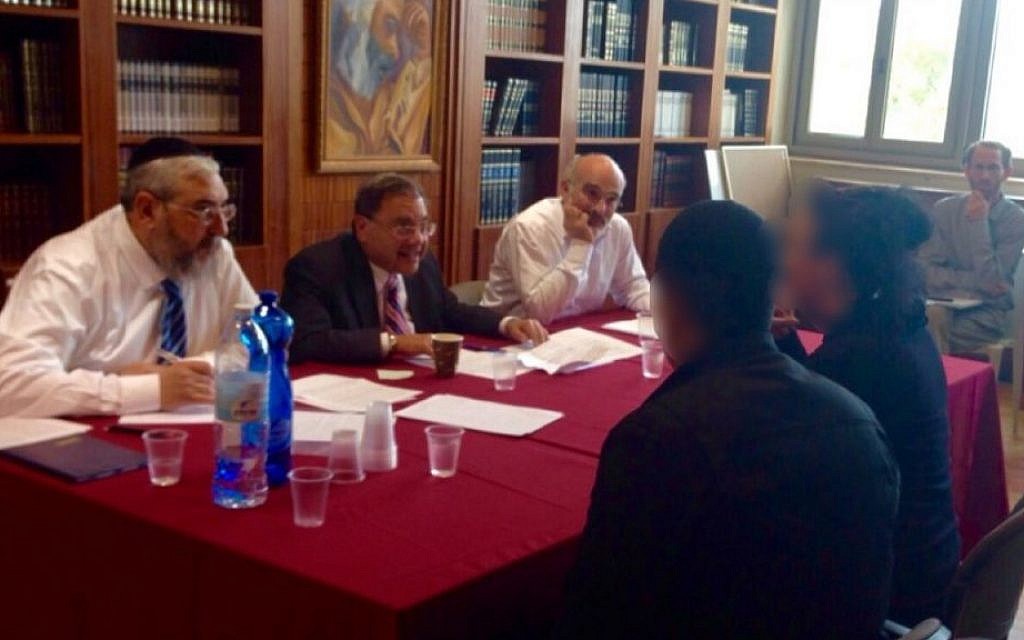 Farber believes that were Giyur Kahalacha to be given state recognition as an Orthodox religious provider, the initiative would be able to serve thousands of such “no religion” cases a year. However, the new bill, said Farber on Monday, is blatantly seeking to undermine the Giyur Kahalacha conversions.

“We’ve proved it can be done a different way — and completely within halachic terms,” said Farber. “We understand the sensitivities of the complex cultural divide between the Orthodox and immigrant communities. The fact that we are now doing 18% of the Orthodox conversions shows we have the recipe right.”

What the draft legislation means for liberal Jewry

Has the ruling opened hypothetical doors to non-Orthodox conversions as well? That’s the question the government is attempting to circumvent with the new Nissim draft legislation.

After overseas Reform conversions were recognized in 1989, the 1990s saw a sharp uptick of cases of Israelis who requested civil recognition after being taught in the Israeli Reform movement followed by a “quickie conversions” abroad. By 2002, the High Court decided that regardless of where the Reform conversion took place — in Israel or abroad — the Interior Ministry must register the convert as Jewish for purposes of the population registry. 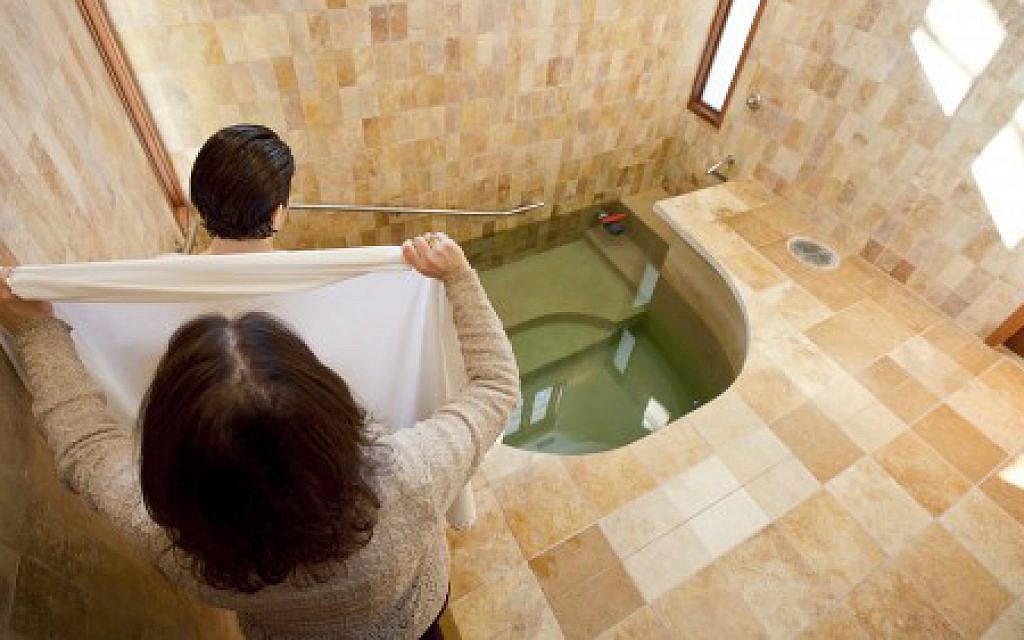 Mikvah immersion is required for Orthodox and Conservative conversions and strongly recommended for Reform conversions. (Mayyim Hayyim/Tom Kates via JTA)

But the decision on citizenship is yet to come.

“That’s the issue that awaits a ruling,” said Rabbi Uri Regev, the head of Hiddush, a non-denominational, non-partisan nonprofit, which works alongside world Jewry towards religious freedom in Israel.

“Everyone is quite confident that the court will rule in favor of the non-Orthodox converts, based on the ruling that was rendered on the private Haredi conversion,” Regev, who is an ordained Reform rabbi as well as a lawyer, told The Times of Israel on Monday.

“With the irony that for the Chief Rabbinate and their puppet masters there is little difference between the two. But they will be careful to maintain that it will not bar recognition for civil purposes of conversions done overseas, trying to block opposition from America,” said Regev.

For Regev, this unusual convergence of interests between liberal Jewry and Modern Orthodoxy could lead to a more unified front. 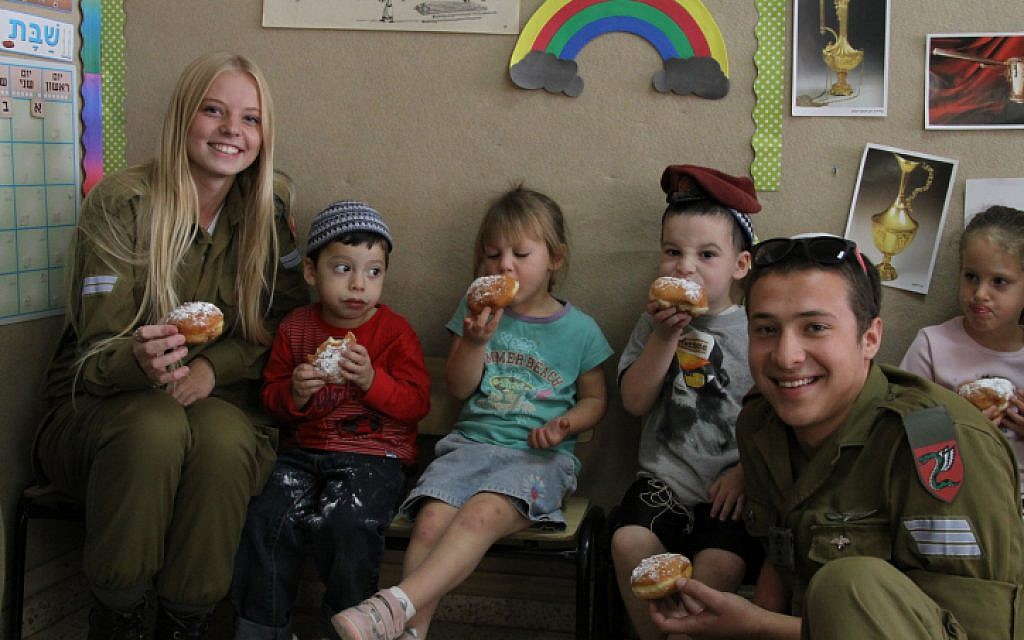 Soldiers considering conversion during a November 7, 2013 visit to a kindergarten in Efrat on Hannukah (Gershon Elinson/ Flash 90)

In a fiery press release, Regev predicted, “The minefields of Israel’s religion and state arena and Israel-Diaspora relations will explode in the coming days.”

“The recommendations regarding the appointment of an exclusive conversion authority to approve conversions in Israel were expected, but unlike the previous rounds of ‘Who is a Jew’ battles throughout Israel’s history, this time the move is directed not only against the non-Orthodox denominations, but also against Modern Orthodoxy. Therefore the intensity of the explosion will be greater than ever,” said Regev.

Itim’s Farber is also concerned about potential dire consequences from the bill on the Israeli-Diaspora relationship. He said that while some progress had been made and that Nissim’s work was to be commended, “the solutions don’t respond to the needs of the hour.”

Perhaps to mitigate fallout from the Diaspora, Nissim is set to meet with Sharansky of the Jewish Agency to discuss the bill, one of several such meetings the two have held.

One positive aspect of the bill, said Farber, is that it legislates the Right of Return for Progressive Jewry’s converts — something that is currently only enshrined through a High Court decision.

“It would anchor that in the law — which is a step forward for the world Jewish community,” said Farber.

Posted by yishmaelgunzhard on April 24, 2018 in Uncategorized