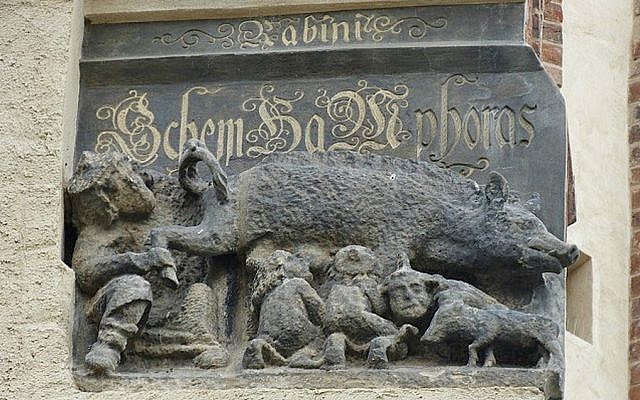 A letter written by Martin Luther in 1543 has been put up for sale. In the letter, he refers to Jews as “devils incarnate” — but we are assured by a theology professor at Boston University that Luther was “not an anti-Semite.”

Europe had a long history of mistreating Jews. Luther plays a part in this grim history, yet as appalling as Luther’s intolerance of his Jewish contemporaries was, Luther was not an anti-Semite. His criticism of Judaism was rooted in theological disagreement over the reading of shared Scriptures, not in racial animus.

Martin Luther described Jews as “wicked and hardened people,” “liars and bloodhounds,” “bloodthirsty, revengeful and murderous,” and “poisonous, bitter worms, who are not accustomed to work.” If that isn’t clear enough, he also stated that “the Jews…are veritably a mixture of all the depraved and malevolent knaves of the whole world over, who have then been dispersed in all countries…to afflict the different nations with their usury, to spy upon others and to betray, to poison wells, to deceive and to kidnap  children — in short, to practice all kinds of dishonesty and injury.”

But wait, there’s more: “Wherever you see or hear a Jew teaching, do not think otherwise than that you are hearing a poisonous Basiliskus who with his face poisons and kills people.”

Aoparently, none of this is hate speech. This American theology professor is telling us that Luther was not an anti-Semite, because hating us for our religion — the oldest form of anti-Semitism — is not anti-Semitism.

All around us — to the horror and consternation of most Jews — people and political groups are changing the definition of Jew-hatred. It seems that all incidents of anti-Semitism are now to be compared to the Holocaust, and anything that falls short of actually gassing us at Auschwitz or shooting us in a Lithuanian forest is not anti-Semitism. The standards are being lowered in order to make it easier to share hateful lies about the Jewish people. This is the way anti-Semitism spreads, because people hate us for what they THINK we do, not for what we do.

The definition is being changed so that people can say the most terrible things about us without fear of social opprobrium or reproach.

Jews are a tiny minority, and it seems that there is very little we can do to stop the anti-Semites. We can sign petitions, go on demonstrations, write to our MPs — and all our protestations are turned against us. We are dismissed as “right-wing,” as racists, as liars, as politically manipulative and controlling, or as “Zionist agents of the powerful Israel lobby.” Arguments online end with the anti-Semites crowing with joy for having successfully baited us, the “Zionazis.” It has been years since I tried to engage in such online combat, because I go into these discussions filled with earnest goodwill, and come out of them in shock, dismay and disbelief.

And still it is getting worse. There is a new trope that is becoming increasingly popular — the notion that the Ashkenazim are all “converts,” who are responsible for “colonizing” the land of Israel after the war. Increasingly, I am seeing posts claiming that the Ashkenazim and everyone descended from them are “fake Jews,” who have no link to the Middle East: 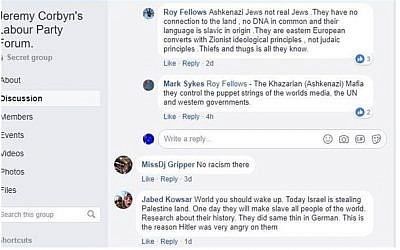 This is becoming commonplace, and what it does is to enable people to tell themselves that they are not racists and anti-Semites, because the Jewish nation that they despise is not in fact Jewish. The real evil-doers, in their eyes, are not Jews but “fake Jews” — also known as “Zionists.”

In the newspeak of the Labour Party, it is not considered hate speech to paraphrase Martin Luther, so long as the word “Jews” is replaced with “Zionists.” Thus, “Zionists are wicked and hardened people, liars and bloodhounds, bloodthirsty, revengeful and murderous. Zionists spy upon others, poison wells and kidnap  children.”

Luther also anticipated “pinkwashing,” and the notion that anything Israel does that is seemingly praiseworthy is in fact an underhanded cover-up of its iniquities: “Should they at times do something good, however, know full well that it is not done out of love for you, nor for your good. In order to have space to live among us they must of necessity do something. But their heart is and remains as I have said. They are a heavy burden to us in our country, like a plague, pestilence, and nothing but misfortune.”

There is another way in which the storm clouds are gathering, and it isn’t pretty: Jews are joining the ranks of the Jew-haters. They are still a small minority in Britain, but they are recruiting. They are sharing the same terrible and manipulative lies and distortions about Israel that the mainstream Jew-bashers are disseminating, and. like many of the Gentile anti-Semites, they truly believe what they are saying. They are forming what they believe are “social justice” groups to support the Palestinians, which in principle is excellent — who doesn’t believe in justice? — but in practice, it is disastrous, because they are sharing the usual anti-Semitic tropes about exaggerated or imaginary human rights abuses, and they are distilling a complicated political struggle into a twisted tale of villainous conquering Jews and their helpless, peace-loving victims.

These groups are also embracing the notion that those of us who stand up for Israel are in fact murderous right-wing fanatics who do not wish for peace, justice or equality. These self-righteous children are sneering at those of us who think that Hamas is unlikely to join up with the Fatah party to form the government of a peaceful nation that will be a companionable neighbour to the people of Israel.

Saying kaddish for the Palestinians killed in the “March of Return” may be a symbolic gesture, but it is not harmless. What it does is to give license to anti-Semites, who can then point at these anti-Israel groups and use them to indicate that “the Good Jews are on our side and against the Zionists.” Another so-called Jewish group, Jewish Voice for Labour, is in essence a hate group run by people so anti-Semitic that some of them were actually thrown out of Labour (despite Labour’s low standards); it is a mix of Jews and non-Jews, and their commitment is to the destruction of Israel, which is to be replaced — via the “right of return” for Arabs — by a single Arab majority state.

I am curious to know where they think the Jews in this new Palestinian state are to go. Hamas’s official line is genocide of the Jews, while Fatah takes the more “moderate” position of achieving the “Complete liberation of Palestine, and eradication of Zionist economic, political, military and cultural existence.” One Fatah official stated that the “first phase” in attaining this goal will be a two-state solution, adding darkly that “Hitler was not morally corrupt; he was daring.” It is therefore questionable what Jews are hoping to gain by assisting the Palestinians to achieve their war aims — and it is worth noting that Jeremy Corbyn has stated that “The Right of Return must be a reality,” so although the Labour Party Manifesto states that Labour supports a two-state solution, in practice, Corbyn advocates the destruction of a Jewish majority in Israel.

So what is to be done? Education is a good way forward, but do not tell yourself that you can educate radicalized bigots out of hating you. You can’t. Is it possible to “change the Labour Party from within”? You’re joking, right? If the Labour Party are elected, British Jews are in for a rocky ride. The pledge of a complete boycott of Israel — including musicians, artists and academics — has already been endorsed by the British Green Party, and there are those within Labour who are pushing for the party to officially join the boycott. We are not going to be rounded up and shoved into cattle trucks any time soon, but do not underestimate the malice that is out there.

About the Author
Rivka Bond is a retired Archaeology Professor living in the UK. She has lived in England, Wales, Scotland, Germany, America and The Netherlands, and has worked on excavations in Israel, Egypt, Jordan, Greece, Ireland and the UK.
As taken from, https://blogs.timesofisrael.com/do-not-underestimate-the-malice/
Advertisement

Posted by yishmaelgunzhard on July 14, 2018 in Uncategorized