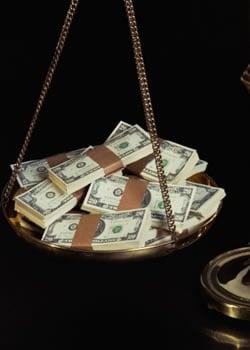 “I can’t understand it,” said the coach of the football team. “It was such an important game that I bribed the referee, and yet we still lost.” “Terrible, isn’t it,” the team captain agreed. “It’s getting so you can’t trust anyone any more…”

This week’s Torah reading, Shoftim, warns that “You shall not take a bribe, for bribery blinds the eyes of the wise and perverts the words of the just.”

The Talmud relates the story of a person who brought Rabbi Ishmael ben Elisha the “First Sheerings”, one of the gifts which are customarily given to the Kohanim (priests).

Rabbi Ishmael asked the man, “Where are you from?”

The person replied, “From such-and-such a place.”

Rabbi Ishmael continued, “Between there and here, you found no other Kohen to whom you could give it?”

“I had to come here for a matter of litigation. I said to myself, since I’m coming here anyway, why not give it to you.”

Rabbi Ishmael refused to accept the gift, and recused himself from the case. Instead, he appointed two other scholars to judge the case. When he passed by the courthouse and overheard the litigation taking place, Rabbi Ishmael found himself advocating for the person who had offered him the gift — “if he wanted, he could argue such-and-such” and present a better case.

When he realized what was happening, he exclaimed, “Cursed be those who accept bribes! I did not even accept anything from him, and even if I would have accepted it, it was something that is mine by rights. Even so, I am leaning toward his favor. Imagine someone who actually does accept a bribe!”

The Torah also tells us “you shall surely pursue justice.” It is hard to stay neutral, to be totally objective and not swayed by external or inappropriate factors. Yet this is the mark of true justice.

Wherever we are, at work, on a jury, as a judge, in our families, the Torah warns us about the ease with which we are susceptible to bribery, especially when we don’t realize it ourselves. It takes introspection and virtue to remain objective and untainted, yet this is what is demanded of us when we find ourselves in a judgmental position.

Posted by yishmaelgunzhard on August 17, 2018 in Uncategorized