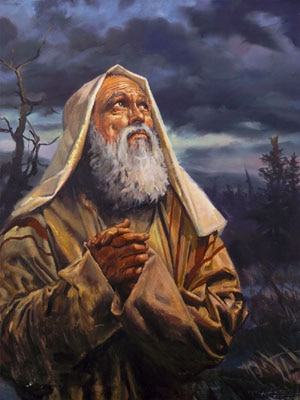 Why is Abraham considered the first Jew?

When he was three years old, Abraham looked around at the world of nature with all its perfection, beauty, symmetry, precision, timing, balance, integration, coordination, unity – and he concluded that for the world to be designed so perfectly, there obviously must be an intelligent designer. It was then that Abraham discovered God.

Noah also knew about God, and his descendants Shem and Ever even had a yeshiva! If so, in what way was Abraham different that he is chosen to start the Jewish people?

But Abraham went out and taught people about monotheism. He pitched his tent, which was open on all four sides, in the middle of an inter-city highway. He authored a 400-chapter book refuting idolatry. And he endured all types of mockery and persecution for holding beliefs that were, to say the least, politically incorrect. In fact, the Torah calls him “Avraham Ha-Ivri” – Abraham the Hebrew. HA-IVRI translates literally as “the one who stands on the other side.” The entire world stood on one side, with Abraham standing firm on the other.

Abraham distinguished himself as being a lover of all humanity. When God sought to destroy the corrupt city of Sodom, Abraham was willing to stand up against God and argue that they should be spared. He cared about everyone and viewed himself not as an individual trying to perfect himself, but as the progenitor of a movement to bring God’s existence into perfect clarity.

That is the Jewish legacy – serving as an inspiration and a role model for all humanity.

Posted by yishmaelgunzhard on August 21, 2018 in Uncategorized