Why Is Tanya Called “Tanya”? 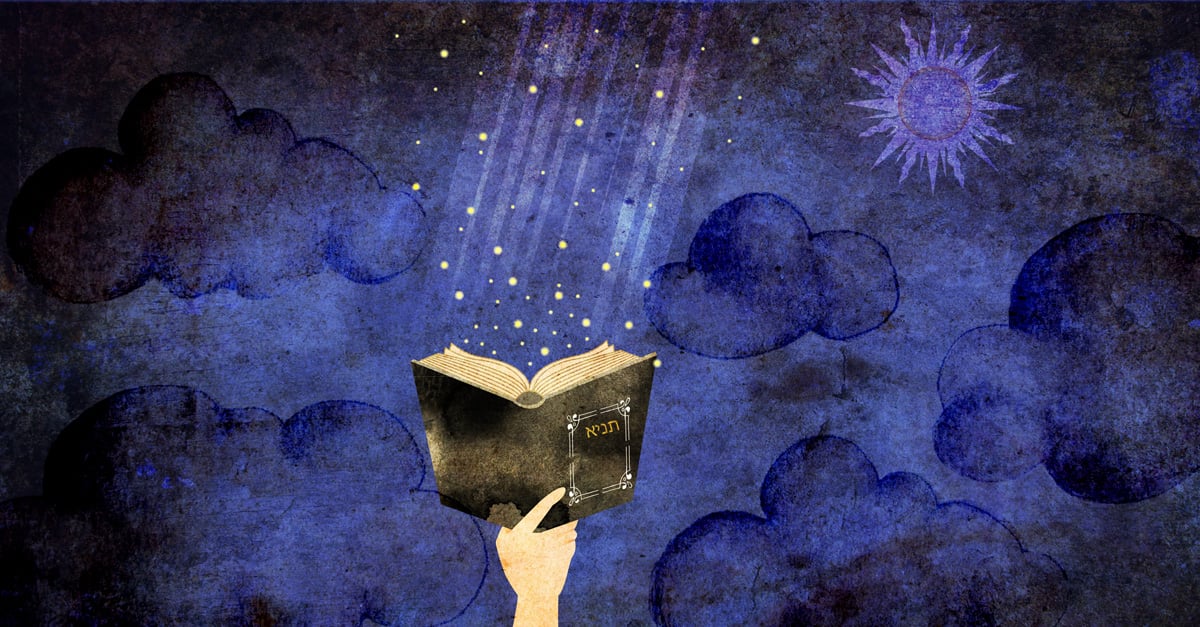 Illustration by Sefira Ross.
You may be familiar with the Tanya, the fundamental text of Chabad Chassidic philosophy written by Rabbi Schneur Zalman of Liadi.

Interestingly, the work was originally published under another title: Likkutei Amarim, “Collected Discourses” (Slavita, 1796). The author humbly refers to his masterpiece as simply a collection of works and teachings of earlier rabbis, disclaiming any originality for his work. It was subtitled Sefer shel Beinonim, “Book of the Intermediates,” indicating that the Tanya is intended for the average Jew, the intermediate person whose moral position is between the tzaddik (“righteous”) and rasha (“wicked”).

Yet the book was simply referred to as the Tanya (“we have learned”), which is the first word of the text. The second time it was published (Zolkiew, 1798), it was done so under the title Tanya, with Likkutei Amarim as the subtitle.

Why is the book referred to as the Tanya? How does this title encapsulate the essence of this holy work? To further complicate things, tanya does not even seem like the appropriate word with which to begin the text.

Generational Terminology in the Talmud

The 1796 Slavita edition is not yet referred to as Tanya on its cover page (credit: chabadlibrary.org)

Every beginning student of Talmud is taught that when the Talmud uses the term tanya, it is introducing a baraita, a teaching from the Tannaim, the rabbis of the Mishnaic age. These sages flourished in Israel during the era of the Second Temple and approximately 200 years afterward.

The Tanya opens with such a quote from the Talmud:

Tanya [It has been taught] (in the end of the third chapter of Tractate Niddah): An oath is administered to him [i.e., the soul before birth, warning him]: “Be righteous and be not wicked; and even if the whole world tells you that you are righteous, regard yourself as if you were wicked.”

But if you open a Talmud to Niddah 30b, you’ll find that this teaching is actually attributed to Rabbi Simlai, who lived in the 3rd century, after the period of the Tannaim had ended. In fact, when the Talmud introduces this teaching, it does so with the words darash Rabbi Simlai, “Rabbi Simlai taught.”

Although there are rare manuscripts of Tractate Niddah where this teaching is preceded with tanya and not attributed to Rabbi Simlai,1 this is not the commonly accepted version.

It appears as though Rabbi Schneur Zalman specifically chose to start his work with the word tanya, and he underscored this intention by introducing the Talmudic teaching in a nonstandard way.2 The third Lubavitcher Rebbe, Rabbi Menachem Mendel, known as the Tzemach Tzedek (and grandson of Rabbi Schneur Zalman), gives two explanations as to why this could be.

This 1805 Zolkiew edition has Tanya as the main title on its cover page (credit: chabadlibrary.org)

In explaining why a special section of the Zohar, known as the Idra Rabbah3 (“The Great Assembly”),starts with the word tanya, Rabbi Yitzchak Luria (“the Arizal”) explains that tanya is also the name of an especially strong negative spiritual force. This force specifically targets Torah scholars by trying to convince them that “it is enough to learn the revealed aspects of the Torah, and there is no need to delve into the mystical.” However, it is specifically through learning the deeper mystical aspects of the Torah that one breaks this negative force.4

Thus, Rabbi Schneur Zalman was indicating that by learning the Tanya, one can break this negative force and realize the importance of learning the deeper aspects of the Torah.5

Eitan: More Power to You

The Zohar notes that the word eitan, which means “powerful” or “mighty,” is an anagram of the word tanya.6

In his work Likkutei Torah, Rabbi Schneur Zalman writes that every Jew has a level called eitan, i.e., “might,” which stems from the essence of the soul and gives us the strength to serve G‑d even in the face of adversity.7

The Tzemach Tzedek explains that by beginning his work with the word tanya, Rabbi Schneur Zalman was hinting that through learning Tanya, we arouse the eitan of our souls, strengthening us in our service of our Creator.8

See What is the Tanya? or just begin learning Tanya here.

Footnotes
1. This teaching is also found in the Talmud, Yevamot 71b, and there it does say the word tanya. Although some commentaries remark that it is a mistake, we also find tanya used to introduce this teaching in Yalkut Shimoni, beginning of Parshat Tazria. Additionally, in his commentary on Yevamot, Rabbi Avraham Min ha-Har (“from the mountain”) refers to this as a baraita that was taught in Niddah. So why did the author specifically cite the teaching from Niddah, where it is generally not preceded by tanya, instead of Yevamot? It appears as if he goes out of his way to show that there is specific intention in using this word.
2. See Torat Menachem 5714, vol. 1, pp. 276–7.
3. Commonly printed in Parshat Naso of the Zohar.
4. Quoted in Ohr ha-Ganuz 2:19.
5. Beit Rebbe, p. 106; Torat Menachem 5714, vol. 1, pp. 276–7.
6. See Tikkunei Zohar, Tikkun 21.
7. Likkutei Torah, Parshat Re’eh.
8. See Sefer ha-Sichot 5703, p. 95.
As taken from, https://www.chabad.org/library/article_cdo/aid/4246615/jewish/Why-Is-Tanya-Called-Tanya.htm#utm_medium=email&utm_source=78_rabbi_y_en&utm_campaign=en&utm_content=content

Posted by yishmaelgunzhard on January 5, 2019 in Uncategorized