Some works of art are perfect receptacles for the stresses and troubles of their times while they are graced with a wisdom that is fundamental and ongoing, making them perpetually relevant. When I was in Miami in February 2020, just before COVID-19 caused the Pérez Art Museum to close down for eight months, I was lucky enough to see one such work—the new installation of sculptor George Segal’s 1987 “Abraham’s Farewell to Ishmael.” Segal died in 2000, and his heart-wrenching “Farewell” was being shown for the first time since the Pérez’s conservation department restored it.

Composed of life-size, free-standing, almost dreamlike figures, Segal’s sculptural tableau presents plaster casts of Abraham, Ishmael, Hagar and Sarah arranged on the bare floor of the museum against the background of a looming rock formation. The scene is a reenactment of the traumatic moment just before Abraham sends his son Ishmael and Ishmael’s mother, Hagar, into the desert: a grieving father cleaves to his firstborn child while his wife and concubine are positioned nearby. Together they create the configuration of an about-to-be-torn-apart family suspended in time. The biblical text is succinct, offering only essential facts about the expulsion, provoked because Abraham’s wife Sarah insisted that Ishmael should not share her son Isaac’s inheritance. But Segal’s sculpture throws attention onto an excruciating moment of ordinary suffering. By refocusing the narrative, he exposes an emotional essence at the basis of the ancient story. 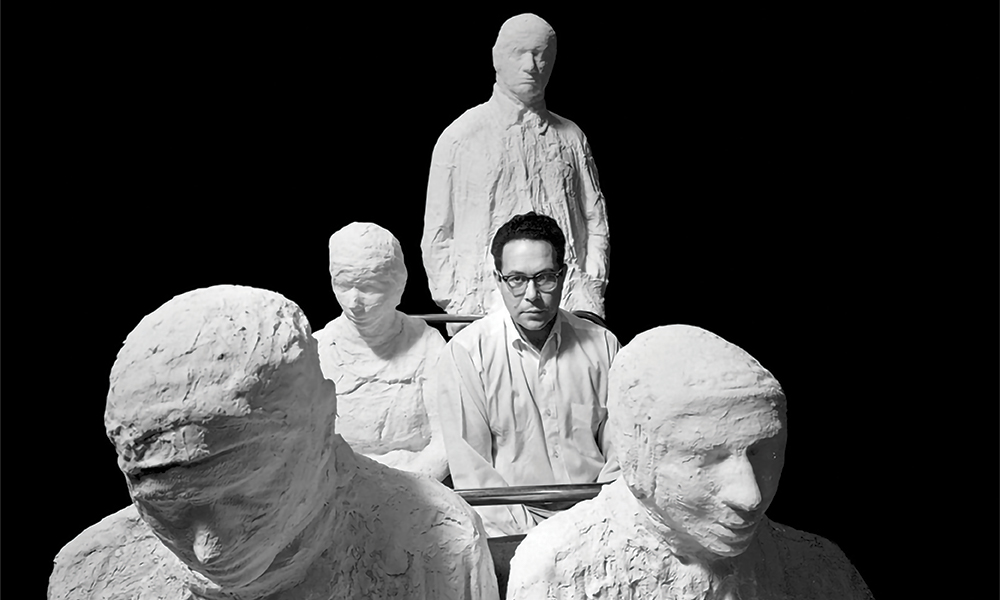 The new repair has strengthened and joined together two portions of the roughly nine-foot-tall unwieldy and massive rock. Thirty-two years ago, the rock, which is made of gypsum cement and acrylic paint, had to be cut in half to get it out of the artist’s studio. The refortified and stabilized formation, braced by timber and chicken wire on the inside, functions as an austere emblem of the wilderness of Beersheba, as sculptural stage scenery, as a mysterious prop as impenetrable as the frozen figures that surround it.

“I suppose,” Segal once noted, “I’m in the business of fleshing things out.”

George Segal was born in 1924 in the Bronx. As a restless young man, he studied at The Cooper Union, Pratt Institute, NYU and Rutgers, idolizing the Abstract Expressionists before becoming a member of the avant-garde cooperative Hansa Gallery in New York City. In 1958, after grappling to find his calling as a painter, Segal turned to sculpture, developing a distinctive technique based on the ancient process of lifecasting (creating a three-dimensional copy of a living human body through the use of molding and casting techniques). In his case, however, he wrapped his models—mostly family members or friends dressed in their own contemporary clothes—in plaster-dipped bandages made from a then newly-manufactured material. In the bare setting of his studio, he had his figures pose in scenes from ordinary life. When the plaster set (and this occurred very rapidly), he broke the molds from their bodies, reworking the surfaces so they were covered with his fingerprints and tool marks as he chipped and polished the exterior finish. Then he put the pieces together, arranging the molds to suit his purposes, creating an art form that merged features of classical portraiture with aspects of Living Theater or “happenings” (the term “happening”—a performance art event—was, in fact, coined by painter and Rutgers professor Allan Kaprow in 1957 during a picnic at Segal’s farm in South Brunswick, New Jersey). 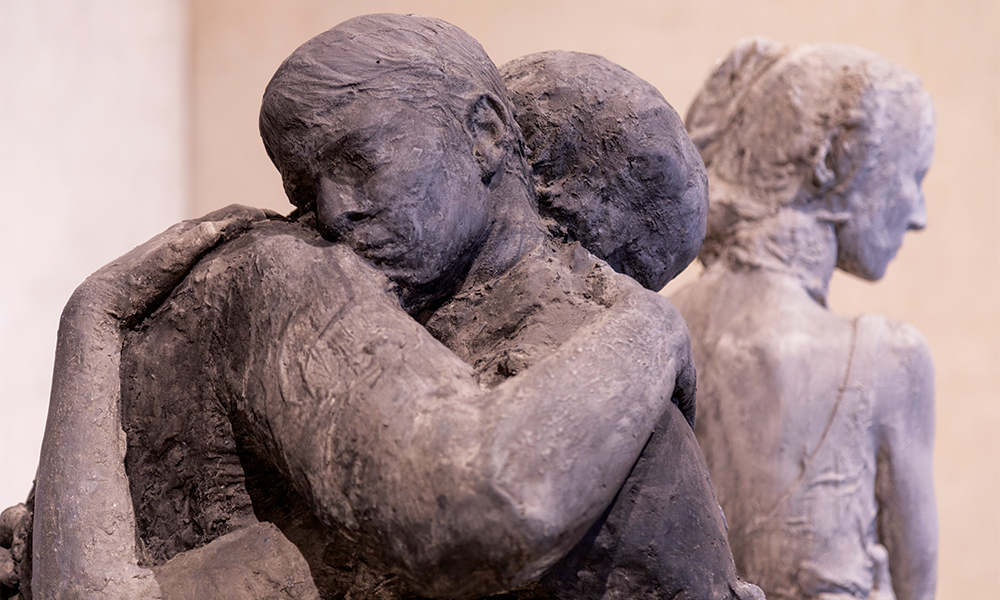 Segal understood that there was a certain amount of chance connected with the completion of his projects, and he thought of his work as collaborative, counting on his subjects to imaginatively participate in his ideas, demonstrating their own emotions through the smallest tensions of muscle, gestures of extended fingers or angled jaw. As he noted, “models never lie,” since their feelings are imprinted into the material. His mysterious, roughened, perhaps even hulking, plaster-cast figures reflected the layers of complication and trauma in the second part of the 20th century, and many of his early pieces, such as “Couple on a Bed” from 1965, now at the Art Institute of Chicago, are iconic representations of an existential isolation that was felt at that time. While his tableaux—anomic passengers riding a bus, forbearing pedestrians crossing a street—have been described as hyper-realistic, they also provide a compassionate glimpse into what he viewed as the enormous pain and loneliness of the human condition. In the later part of his career he worked on several public monuments, most notably his 1991 “Depression Bread Line,” commissioned for the Franklin Delano Roosevelt Memorial in Washington, DC, and “The Holocaust,” installed at the California Palace of the Legion of Honor in San Francisco’s Lincoln Park in 1984. 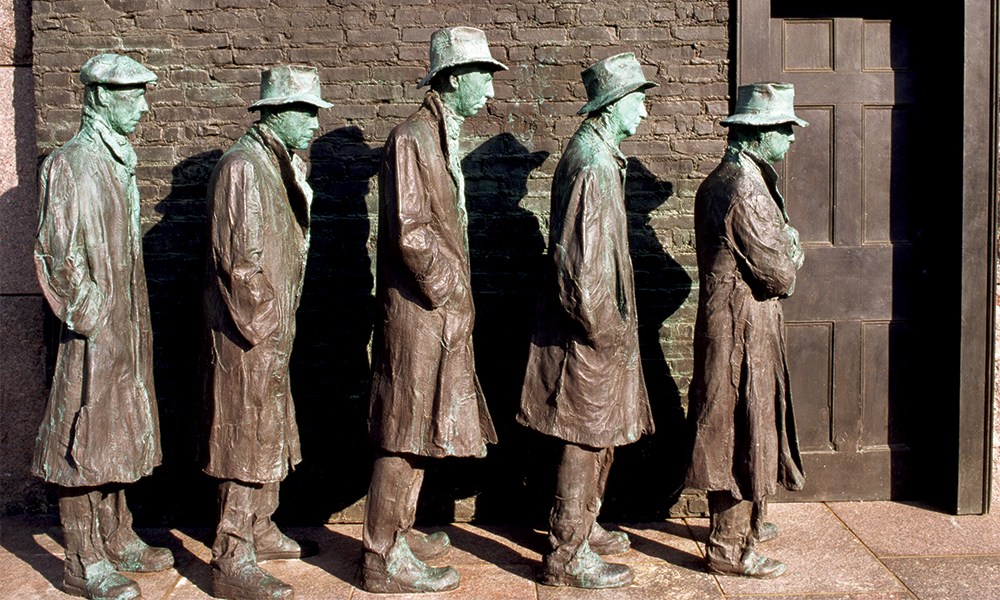 Segal’s 1991 “Depression Bread Line,” made of plaster, wood and metal and cast in bronze, was commissioned for the FDR Memorial in Washington, DC. Figures include a life-cast of Segal himself. (Photo credit: Wikiart)

The son of Polish Jewish immigrants—kosher butchers in the Bronx who later became chicken farmers in New Jersey—Segal was profoundly interested in the open-endedness of biblical texts. He noted, in a 1979 documentary, how remarkable it is that when reading the Bible “the fleshing out is completely up to each reader,” adding, “I suppose I’m in the business of fleshing things out.” Between 1978 and 1987 he embarked on a series of four pieces based on the Genesis narrative, restaging complex and perplexing moments that were essential metaphors for fundamental human dilemmas. “Abraham’s Farewell to Ishmael,” the final piece in the series, depicts the deep grief of leave-taking. Segal set his characters in motion, having them act out the cruel domestic tragedy from the Bible, where ruptured family relationships reveal the tension and balance between compassion and anguish. In Segal’s choreography, Abraham grasps hold of his firstborn, lowering his head onto Ishmael’s shoulder in grief; the boy’s face reflecting trust and acceptance as he hugs his father for the last time. Hagar, fortifying herself, touches one hand to her waist, raising the other against her chest like a brace. The dark, hooded figure of Sarah, a fury or ghost (after all, according to the Bible, she would have been 90 years old), seems to float in the theatrical roundabout.

Painted in shades of gray, “Abraham’s Farewell,” reflects the somber and mournful nature of the biblical narrative, while the color also references the humanistic cast sculptures of the late-19th and early-20th centuries. You can see something of the clay lumps of Degas’ sculptured textures on Segal’s plaster surfaces, but because of his figures’ contemporary clothes—for instance, Hagar’s loose skirt, bulky shoulder bag and the strung beads so popular in the 1980s—you also recognize the modernness of the work. In this way, the piece wobbles in its own time warp.

Segal was remarkable as an artist because he recorded the most particular details while simultaneously showing how they are part of what is universal. Drawing attention to Abraham’s grief, he demonstrated how the shock of family separation is an age-old part of the human condition. Sarah and Hagar are incarnations of the entanglements and passions that are often below the surface but set every exile into motion.

When I moved around the life-size characters in the gallery, I noticed that each figure took a turn dominating the narrative. Abraham and Ishmael’s arms were almost braided together in Segal’s tableau, and it was clear their separation would be an agony. It was impossible not to think about the legacy of the expulsion and how Isaac and Ishmael would themselves become forefathers of two separate peoples so painfully intertwined today. Ishmael and his mother were literally refugees when they entered the desert, and their suffering is a reminder of today’s refugees and ruptures in our national family. Segal was wise to choose the dignified young woman as his model for Hagar. Seemingly planted like a pillar, a caryatid, or a mourning figure from the Renaissance, she looks compliantly out and into the unfolding calamity, an embodiment of human suffering, and I couldn’t help but hope that she’d survive.

Posted by yishmaelgunzhard on February 11, 2021 in Uncategorized