16 Facts Everyone Should Know About Hasidic Jews

1. The Hasidic Movement Is About Love, Joy and Humility

Hasidim belong to a movement that was founded by Rabbi Israel Baal Shem Tov, who taught love, joy and humility—both in our service of G‑d and in our treatment of fellow human beings.

In the early 1700s, in the area today known as the Ukraine, a young orphan boy named Israel ben Eleazar loved to wander into the forest, even sleeping there overnight. His father’s last words echoed in his mind, “Fear nothing, fear no one, but G‑d Himself, and love every Jew as you love yourself.”

Eventually, he met up with a network of hidden tzadikim (“righteous ones”), who traveled throughout Eastern Europe, encouraging Jews to be better Jews and lifting their spirits. Israel rejected the harsh reproaches that had become standard fare of traveling preachers. Instead, he spoke of G‑d’s love for every Jew, and how much He treasured their every good deed.

By 1740, he was known as “the Baal Shem Tov” (“Master of the Good Name”), and settled in Medzibuz, where thousands came to hear his teachings. The Baal Shem Tov taught that every Jew, scholar and simpleton alike, could connect with G‑d through learning Torah and doing mitzvahs with love, joy and simple, earnest humility. 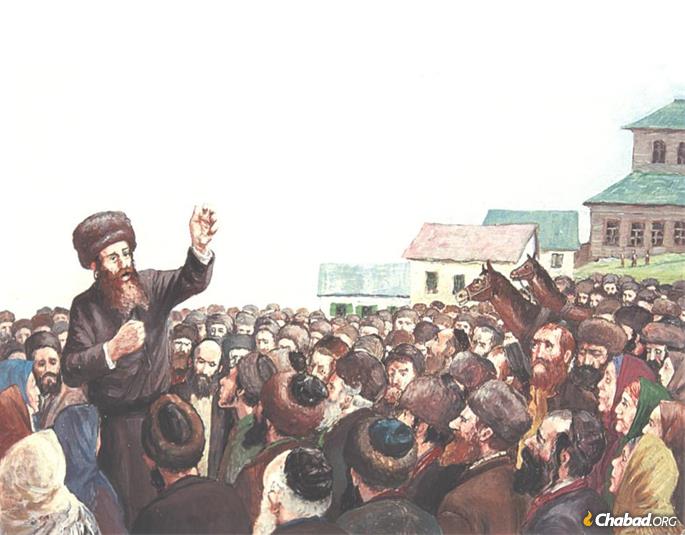 The teachings of Hasidism are an extension of the Kabbalistic writings of Rabbi Shimon bar Yochai, Rabbi Isaac Luria and others. The Hasidic masters made these mystical teachings accessible and practical for the everyman.

A Hasid will study in-depth and reflect upon how these teachings bear upon our relationship to G‑d, His relationship to the world and of how the mitzvot intensify that relationship. That study is called Hassidus.

A Hasid, then, is one who strives to become a better person and a better servant of G‑d through studying, contemplating, and internalizing Hasidic teachings. 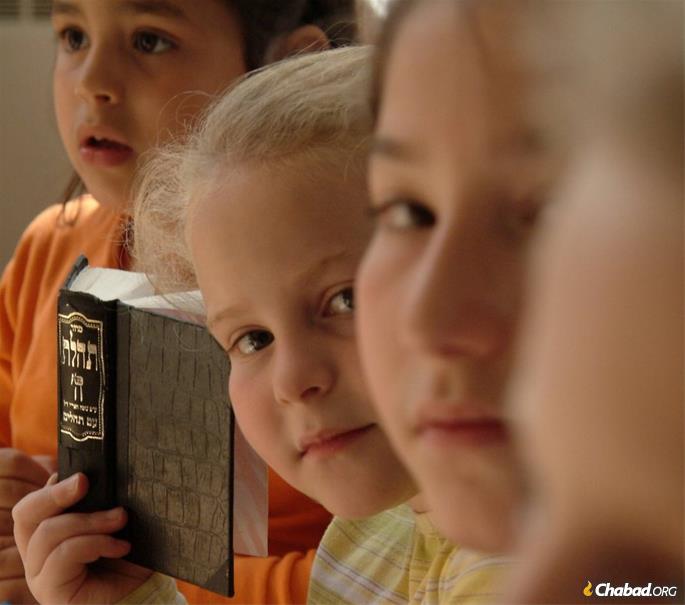 3. Not All Hasidim Are the Same

Every Hasidic group has its own unique flavor and focus. For example, the Hasidic groups influenced by the masters of Pshischa and (notably Gur Hasidim today) value simplicity, austerity and a devotion to the stark, unvarnished truth. Breslov Hasidim place supreme value on maintaining a joyful disposition, “hitbodedut” (private conversation with G‑d), and a trusting faith in G‑d at all times. And yet other Hasidim place their focus on kindness to others as the overarching quality.

Many hasidic groups today have taken an insular approach to self-preservation—some more than others. Chabad Hasidim, on the other hand, take personal responsibility for every Jew, with total disregard for denomination or lifestyle.

Hasidim use mobile phones, drive cars and use other forms of technology. Why not? After all, the sages taught that “All that G‑d created in His world, He only created for His honor.” (Avot 6:11)

Chabad Hasidim in particular say that this applies especially to the scientific discoveries of recent years—their purpose is to add honor to G‑d by using them for holiness, Torah and mitzvot, and bring the world to its ultimate, messianic state.

At the same time, Hasidim are very wary of Internet use, as should be anyone concerned about their moral and psychological well-being. Television is also considered off limits.

In virtually all Hasidic communities, minors are allowed zero or very limited access to the Internet. Those who use Internet for business are advised to employ filters and other safeguards. The principle concerns are exposure to pornography, FOMO addiction and other forms of compulsive behavior associated with unguided Internet use.

In the Hasidic enclave of Meah Shearim, Jerusalem © Norman Frankel

Rebbe is simply the Yiddish pronunciation of rabbi. However, it has come to refer to the leaders of the various Hasidic groups.

There is no formal job description of a rebbe, nor is there an application or selection process to become one. So what is a rebbe?

In all times, there were people who devoted their lives to union with G‑d and to His service. But they often removed themselves from the common folk, so as to immerse themselves in study, contemplation and prayer.

The original leaders of the Hasidic movement assigned such people the task of providing guidance and inspiration to each member of their community, so that every person could feel close to G‑d and serve Him with love, awe and joy.

The relationship between a hasid and his or her rebbe is a close and intimate one—much more than that of teacher and student. The hasid must make his own decisions and work hard to achieve his goals, but the rebbe is there at every stage to guide and assist. 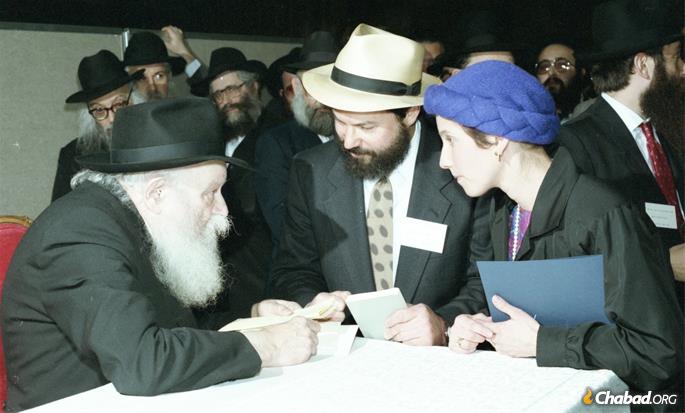 A couple in conversation with the Lubavitcher Rebbe

It’s for good reason that contemporary Jewish music is often referred to as Hasidic music. The great Hasidic master, Rabbi Schneur Zalman of Liadi, taught that “music is the pen of the soul.” Some Hasidic music is rousing and invigorating, and some is contemplative and sobering, each giving expression to another facet of the human experience and the man-G‑d connection. 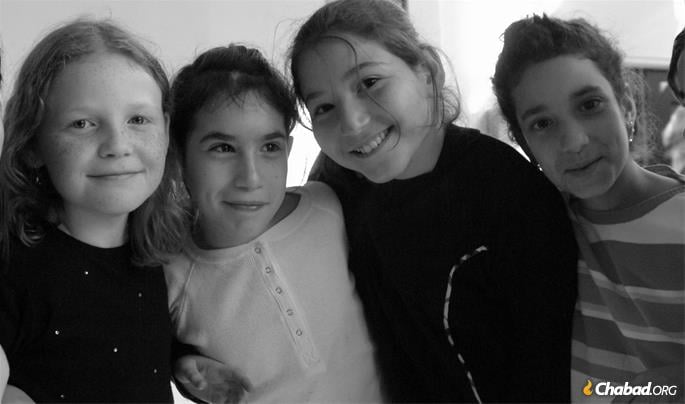 The Hasidic tale can take many forms. Often it is a parable carefully crafted to deliver a lesson. In other instances, the Hasidic story recounts the deeds, piety or adventures of rebbes and Hasidim of past generations. Lovingly told and retold, Hasidic stories from a rich oral tradition and an endless font of inspiration. 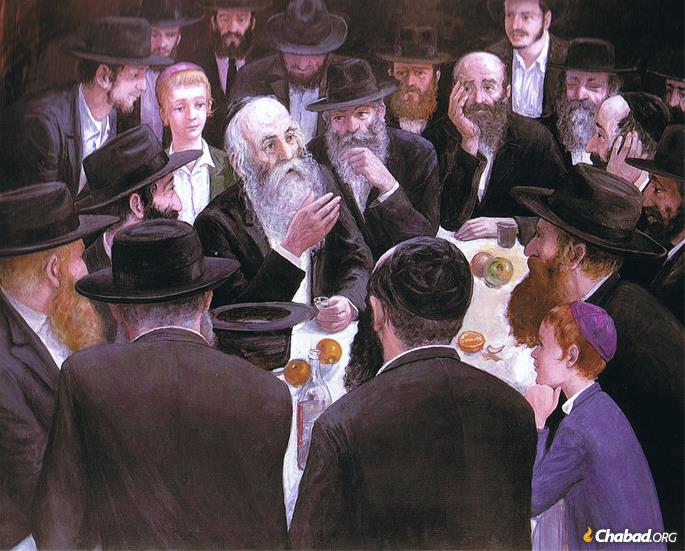 Hasidim are disproportionately represented in volunteer ambulance corps and other communal organs of kindness. The bikur cholim (hospital visitation) of the Hasidic community is legendary, as are the gemachim, free loan organizations for everything from porta-cribs to to wedding gowns. The early Chabad Hasidim would say, “this piece of bread is yours like mine,” placing the “yours” before the “mine, since the focus was on the other. 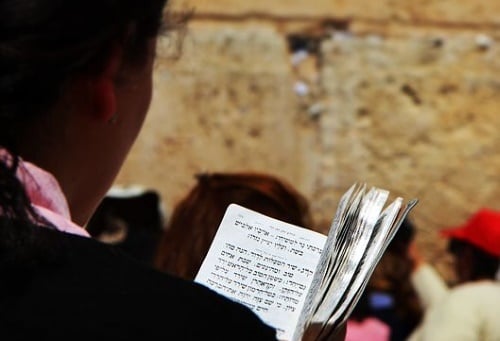 A Hasid’s headgear and clothing might be an indication of the group to which he belongs. A wide velvet hat is the hallmark of a Hungarian Hasid, a taller velvet hat worn backwards (so that the bow sits on the right) is a giveaway for a Vishnitzer Hasid, a rounded felt hat denotes a Gur Hasid, and a pinched fedora generally—but not always—sits atop the head of a Chabad Hasid.

Really, there are two ways to define Hasidic Jews: as sociological groups, or as adherents of a certain ideology and way of life.

So you might be sociologically grouped as a hasid, but not ideologically. And vice-versa: You could be a sociological outlier, but a true hasid.

Really, to be a hasid, there’s a very simple formula: If you study the teachings of the Hasidic masters and bond strongly with one of them, show love to every Jew, strive to do G‑d’s mitzvahs and learn His Torah out of love and joy, then you are a hasid.

10. Hasidim Were Once Persecuted

When Hasidim came into being in the latter half of the 18th Century, many viewed the new group with suspicion. Were the Hasidic Jews truly pious? Would they remain faithful to Torah and mitzvah observance? Some overzealous people took it upon themselves to harass and intimidate Hasidic Jews.

In 1798, Rabbi Schneur Zalman of Liadi was arrested by the Czarist authorities based on trumped-up charges of revolutionary activity concocted by jealous opponents. His release from prison on the 19th day of Kislev is marked in Chabad as the “New Year of Hasidism.”

Years later, in Communist Russia, Hasidim risked their lives to uphold Jewish life in the Soviet Union. While many Hasidim met their deaths at the hands of the Soviet Authorities and others endured decades in the gulag, they were victorious and the flame of Judaism burned bright even in the darkest of times. 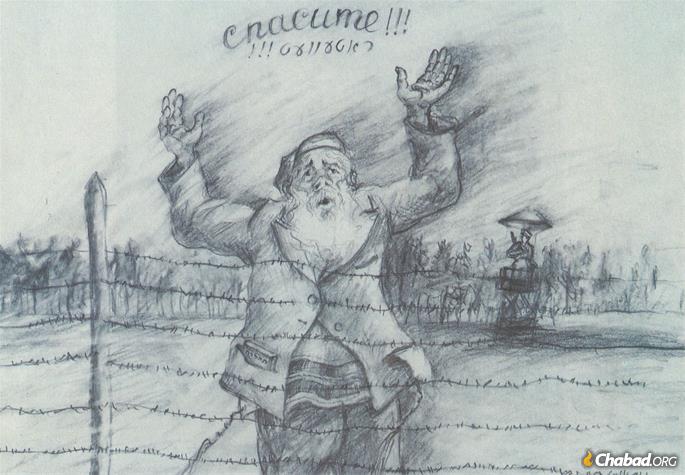 In this drawing, Hasidic artist Hendel Lieberman (who lost his wife and daughters to the Nazis) depicts his brother, legendary Reb Mendel Futerfas, who spent 14 years in Siberian gulags.

11. Hasidim Are the Most Rapidly Growing Group Within Judaism

By the mid-19th century, at least half of Eastern Europe’s Jewry considered themselves Hasidim—and most of the world’s Jewry lived in Eastern Europe.

But in the 20th century, the anti-religious communist regimes, together with the devastation of the Holocaust, almost completely wiped Hasidic Jewry off the map. Yet today the Hasidic community is burgeoning in ways in which the Holocaust survivors who planted the roots of their shattered European youths in Israel and North America could not even have imagined.

How did such a miracle occur?

For one thing, strong-willed, charismatic leaders worked hard to lift up the spirits of these refugees from Europe, to build up neighborhoods with schools and jobs.

For another, Hasidic Jews tend to marry young, have large families and remain within the fold.

Hasidic teachings are rapidly catching on today. Although not all who study these teachings join a Hasidic group, they nevertheless often take on a Hasidic way of life.

There are no censuses on Hasidic groups, and it would be pretty hard to determine in many cases. For example, estimates of the number of Chabad Hasidim range from 50,000 to 200,000. Altogether, counting adults and children, the number of Hasidim worldwide as of 2005 was estimated at 400,000 and rapidly growing due to a high birth rate. Most likely, half live in Israel, another 30-40% in America (mostly Brooklyn and New Jersey), and the rest spread out throughout the world, particularly in Great Britain, Antwerp and Montreal.

Hasidic groups are generally named after the town in which their rebbes held court. Some of the largest and most conspicuous groups today (in no particular order) are: 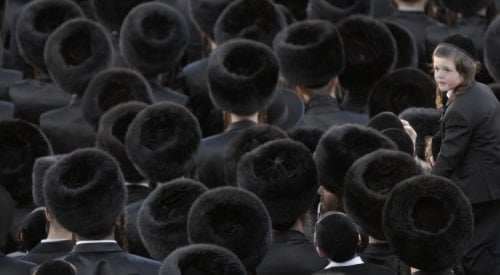 This is not unique to Hasidim, as Jewish law requires this from all married women. While some Hasidic women prefer kerchiefs or snoods, the Lubavitcher Rebbe encouraged women to use a wig. Often made of human hair, a well-crafted wig can be elegant and attractive. 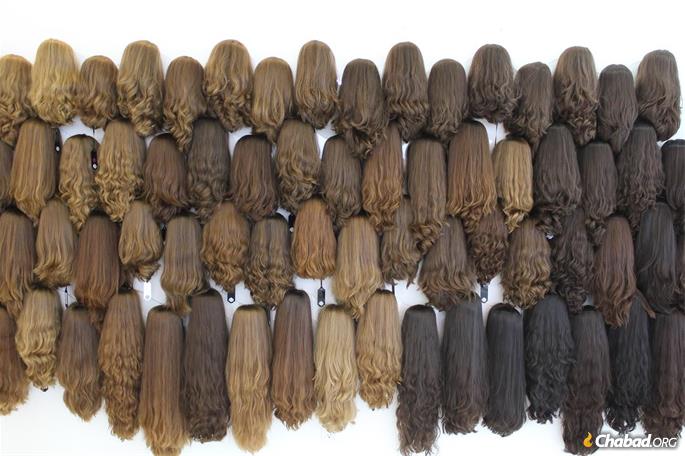 The full beard is not either unique to Hasidim, as Jews have been sporting beards since Biblical times. In two separate places, the Torah forbids a man to cut his facial hair. In addition, Kabbalah attaches great importance to the beard, teaching that the “thirteen locks” of the beard are representative of G‑d’s thirteen supernal Attributes of Mercy.

A Hasidic man in Uman, Ukraine

15. Yiddish Is the Lingua Franca of Hasidic Jews

The Hasidic Movement began in Eastern Europe, where the vast majority of Jews spoke Yiddish. Even today, Yiddish is the language of choice among many Hasidim. Since Hasidim is an open movement, which is constantly gaining new adherents, many Hasidim speak Modern Hebrew, English, French, Russian and Spanish.

Don’t get thrown off by the garb. Hasidim are unique individuals with their own predilections, dispositions, likes, dislikes, hobbies, interests, and life experiences. Like you, they have bad days, good days and in-between days. Some are shy, some are boisterous; some are diligent and others are daydreamers; some are leaders and some are followers.

So next time you meet a Hasid. Remember that he or she is a regular human being trying his or her best to serve G‑d in the world He created for us all. 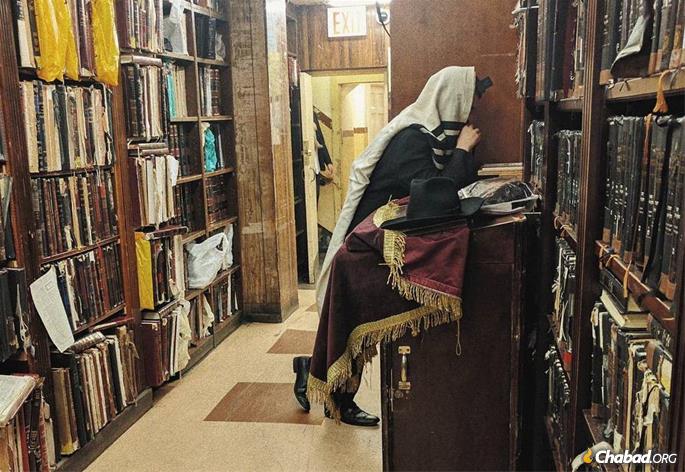 A Hasid in introspective prayer © Mordechai Lightstone
As taken from, https://www.chabad.org/library/article_cdo/aid/4079238/jewish/16-Facts-Everyone-Should-Know-About-Hasidic-Jews.htm
Advertisement

Posted by yishmaelgunzhard on August 4, 2018 in Uncategorized