You Can Change God’s Mind

04 Aug
When Moses saves the Children of Israel through prayer, he teaches us one more way to know God (Ekev) 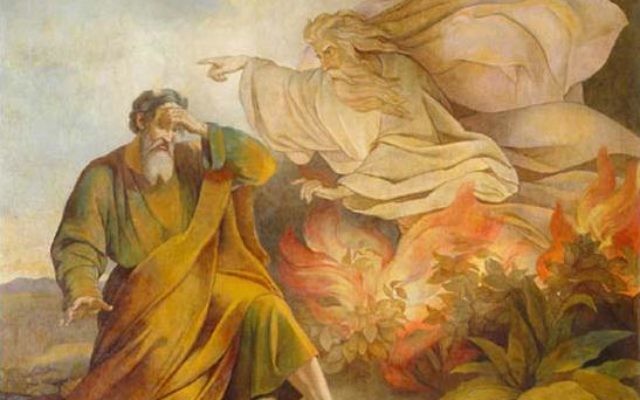 This week’s parsha, Parshat Ekev, poses several theologically difficult questions, and in the process of understanding the challenges they pose, we are able to attain a more profound understanding of the relationship between God and humanity.

This idea that God can change His mind raises a serious theological question. When human beings “change” their minds, they are fundamentally admitting that the first decision had been incorrect — or, at the very least, not perfect — and therefore needed to be revised. But if God is all-knowing and just, then every decision He makes is — by definition — the correct, fair, right decision. How can Moses, or any other human being, for that matter, pray to change God’s mind — and succeed?!

For that is how Parshat Ekev opens. Moses is in the process of recounting the experiences of the Jewish people in the desert (chapter 9) — essentially reflecting on narratives that appear first in other, earlier, parshiot. Moses considers the Sin of the Golden Calf — the events themselves took place in Exodus, chapter 32. Similarly, he addresses the Sin of the Spies — which took place in Numbers, chapter, 13. He’s not just giving a history lesson, however. Moses informs the Children of Israel that these two sins had made God angry enough to destroy them: “At Horeb, you angered the Lord and the Lord was incensed with you to destroy you” (Deut. 9:8).

Indeed, God is harsh: “Leave Me alone and I will destroy them and obliterate their name from beneath the heavens…” (Deut. 9:14). But because Moses prayed on behalf of the Children of Israel, interceding on their behalf, the Divine does not wipe out the people. God changed His mind. To be sure, Moses’ prayer was not a rushed, half-hearted request for an acquittal; rather, he “fell down before the Lord, as before, 40 days and 40 nights.” He “neither ate bread, nor drank water, because of all your sins that you had committed, by doing evil in the eyes of the Lord to anger Him” (Deut 9:18). And it was to that devotion that God responded with mercy.

Our understanding that the One who is omniscient should not be able to reverse a decision is influenced by Maimonides’ rationalist understanding of the Divine.

In his Mishneh Torah, Rambam explains the nature of God: “He does not change, for there is nothing that can cause change in Him. There does not exist in Him… anger or laughter, happiness or sadness…” (Hilkhot Yesodei HaTorah 1: 11). If the Creator does not experience emotions, then there would never be motivation to mitigate against any divine decision. Moreover, how could Moses present God with a new argument against His decision? In all of His omniscience, surely He already knows any and all of the arguments that Moses might make.

This brings us to another sharp question: Why does God reveal to Moses, or to any other prophet, what He intends to do? Presumably, God does not need their permission to act. And if His purpose in doing so is to boost the prophets’ standing, giving them the means to impress others, when they predict the future, as revealed to them by God — it is worth nothing that, often enough, the prophets’ audiences are not impressed by them.

Consider, instead, Moses’ response to God’s revealed intent to destroy the people — namely, praying and fasting for the people’s salvation. It would seem that God reveals the intended destruction with this very outcome in mind. Namely, the prophet praying on behalf of the people, trying with all his heart to thwart the impending punishment. Additionally, one might suggest, in the context of other biblical prophets, that the revelation is designed to provoke the people to repent.  Either of these actions would cause God to change His divine plan.

Which is to say: When the Children of Israel sin, God renders a judgement based on the seriousness of the crime. He then puts the prophet in place to defend the people, and welcomes Moses’ argument for clemency.

Which is to say: God never wanted to destroy the people.

It seems a surprising role for the prophet to play. We are accustomed to think that a prophet’s job is to bring the word of God to humanity. The events of Parshat Ekev, however, indicate that prophets are also tasked with bringing the cries of humanity to God.

In fact, from the very first time the term “tefillah” (prayer) appears in the Torah (Genesis 20:7), the prophet’s role as a passionate advocate for the people is on display. God tells Abimelech to release Sarah back to Abraham: “…return the man’s wife, because he is a prophet, and he will pray for you, and (you will) live; but if you do not return (her), know that you will surely die – you and all that is yours.”

This turns the old adage that “God desires the prayers of the righteous” (Hullin 60b) on its head. That is, not only are the prayers of the prophets dear to God, as it were, but He precipitates the occasions for them to pray on behalf of their flocks. In that prayer, the prophet fundamentally partners with God to protect the people.

The second theological conundrum of our parsha is found in chapter 10, verse 12:

From our first reading of this verse, we must understand this “walking” that people, who are physical beings, are to do in the ways of God, who is not, must be figurative. That is, if people are created in the image of God, then presumably humanity has the ability to imitate the Divine. But, given Maimonides sharp insistence that God is not corporeal in any way, that logic inherently defaults the verse to anthropomorphism.

Maimonides bases his entire system of ethics on the notion that humanity must “emulate God in His beneficent and righteous ways to the best of one’s ability” (as Nachmanides formulates the principle in Sefer ha-Mitzvot, positive commandment 8). Rambam maintains that man achieves true glory by acquiring, “as far as this is possible for human beings, the knowledge of God, the knowledge of His providence, and of the manner in which it influences His creatures in their production and continued existence.” With that knowledge, he maintains, people will automatically be disposed to seek lovingkindness, justice, and righteousness, in so doing, imitate the ways of God” (Guide of the Perplexed, 3:54).

Which is to say that in order to be like God, people must attain whatever knowledge of Him is humanly possible.

These two theological conundrums taken together suggest that one way to imitate God is to pray to Him to change His decree. That is, when God engineers a situation designed to provoke the prophets to reach out to Him in prayer to save the Children of Israel, He implicitly highlights His capacity to change that decree. When human beings reach out to God in prayer, seeking that change, they acknowledge that capacity, increase their knowledge of the Divine, and imitate Him.

About the Author
Dr. Chana Tannenbaum lectures at Bar Ilan University, Michlelet Herzog, and Matan. She has worked as a Jewish educator, in teaching and administration, for more than 30 years. She earned her doctorate at Yeshiva University, where she was also the recipient of the Baumel award, given to the most outstanding faculty member throughout Yeshiva University. Dr. Tannenbaum made aliyah with her family in 1997, moving to Nof Ayalon.
As taken from, https://blogs.timesofisrael.com/you-can-change-gods-mind/
Advertisement

Posted by yishmaelgunzhard on August 4, 2018 in Uncategorized