When the Nazis launched the Kristallnacht pogrom against Jews during November 9-10, 1938, the reaction from many religious leaders was muted. Most Catholic leaders in Germany did not criticize the destructive pogrom and across the Atlantic, there was similar silence from the flagship Jesuit journal America.

But a new book portrays how not all Jesuits — members of the Society of Jesus — kept silent about the Nazis. The daringly titled, “Jesuit Kaddish: Jesuits, Jews, and Holocaust Remembrance,” depicts how some priests joined the resistance, some gave their lives to it, and 15 even became recognized as Righteous Among the Nations.

Yet it’s those who did not speak out — or who even joined the Wehrmacht as chaplains — who remain a primary source of concern for author James Bernauer, S.J., a Jesuit who retired this year from 40 years as a professor at Boston College. The book was published by the University of Notre Dame Press in March.

“This should have been written about years ago,” Bernauer told The Times of Israel in a phone interview, mentioning his surprise that many in the highly academic Jesuit order didn’t know about this part of their history. 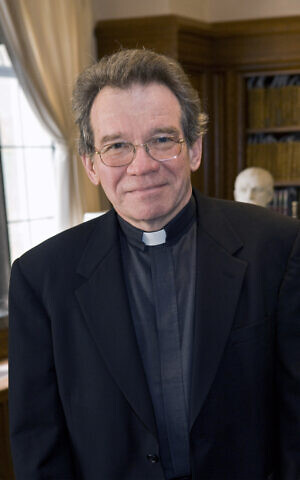 Unlike past scholarship on the Catholic Church which has focused on the papacy during the Holocaust, “Jesuit Kaddish” zooms in on the international order of the Jesuits, who were founded in 1534 by Saint Ignatius of Loyola and have created academic institutions worldwide. One such institution is Boston College, where Bernauer was director of the Center for Christian-Jewish Learning and served as the Kraft Family Professor of Philosophy. The most famous Jesuit is arguably Pope Francis, whom Bernauer has met and praises.

Bernauer sees a contrast between Jesuits of today and of the past. His book includes a statement he has written in which Jesuits can offer what he describes as “repentance and remorse” for historical wrongs.

The book discusses individual Jesuits’ hostility to Jews and Judaism through World War II, expressed not only through anti-Semitism but also what Bernauer calls “asemitism” — a belief in a world without Jews. This latter subject arose in a famous 20th-century, post-Holocaust conversation between two religious leaders shown on the book’s cover: Rabbi Abraham Joshua Heschel and Jesuit Gustave Weigel, a pioneer of ecumenism in the United States.

In the early 1960s, Heschel asked his friend Weigel a litany of questions — beginning with “is it really the will of God that there be no more Judaism in the world?” and ending with “Would it really be ad maiorem Dei gloriam to have a world without Jews?” The Latin phrase, which means “the greater glory of God,” is the Jesuit motto. 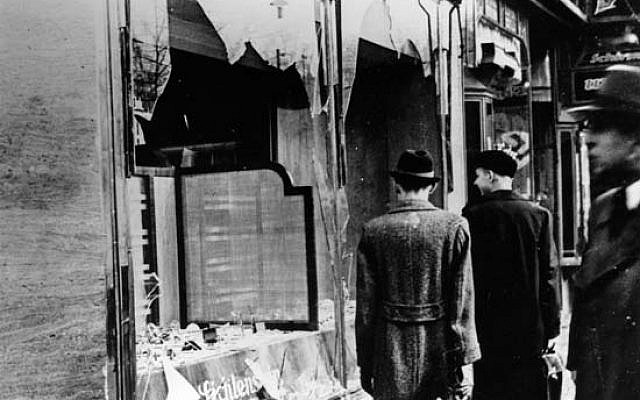 The aftermath of the ‘Kristallnacht’ pogrom in Germany, November 1938 (public domain)

Bernauer explained that the conversation between Heschel and Weigel helped influence his unconventional choice of a title. So did an exhibit in Frankfurt that characterized the Nazi project as “an effort to silence the Kaddish forever,” which caused him to see Heschel’s statements in a new light.

Was the ambition to silence the Kaddish and Jewish prayer really that distinct from the Catholic ambition to surpass Judaism and convert Jews?

“[Heschel’s] questions there were a direct interrogation of the Society’s [past] thinking,” Bernauer said. “Was the ambition to silence the Kaddish and Jewish prayer really that distinct from the Catholic ambition to surpass Judaism and convert Jews? It’s a question we all live with — the whole notion of conversion of the Jews and its centrality to Catholic thought and Jesuit thought at the time.” 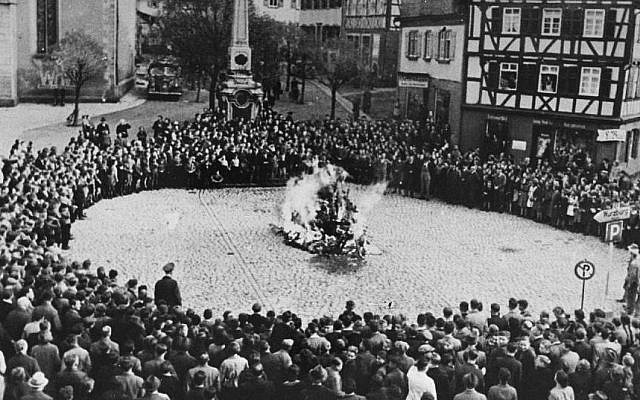 Schoolchildren and others brought to watch the burning of synagogue furnishings on Kristallnacht in Mosbach, Germany, November 1938 (courtesy)

Bernauer first became aware of the Holocaust while growing up in what was then the heavily Jewish neighborhood of Washington Heights in New York. In Fort Tryon Park, he would see Jews with concentration-camp numbers tattooed onto their arms. As a high school student, he and the rest of the world breathlessly followed the Eichmann trial. Going on to study philosophy at Fordham University and the State University of New York at Stony Brook, his areas of expertise have included the famed chronicler of the Eichmann trial, Hannah Arendt. His scholarly travels took him to Germany, France, and Israel as he continued to study Holocaust-related topics.

Anti-racist letter gets lost in the mail

In the book, Bernauer shares how a Jesuit leader helped stifle a papal letter on racism even as the need for it grew during the period of Fascist ascendancy, when Kristallnacht led to the burning of synagogues, Jewish businesses, and homes in Germany and Austria. 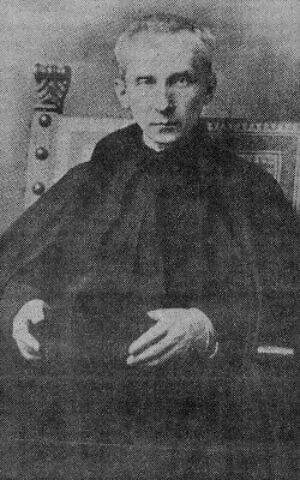 An early undated photo of the Polish Jesuit Wlodzimierz Ledochowski, who was serving as the Superior General of the Jesuits at the outbreak of World War II. (Public domain)

As Europe largely declined to condemn fascism, Pope Pius XI wished to create an encyclical — or papal letter to the Catholic Church — that would address racism. It was supervised by the Superior General (or head) of the Jesuits, Wlodimir Ledóchowski.

“[It seems] that Ledóchowski deliberately kept it from the Pope for several months,” Bernauer writes. He calls Ledóchowski “fiercely anti-Communist, and one source of his hostility toward Jews was the fact that he held them partially responsible for Communism.”

In WWII, Bernauer said, Jesuits motivated by anticommunism as well as patriotism served as German military chaplains in the East, even though Hitler had banned them from that position. Bernauer estimates their number as 651, with 405 ultimately dismissed due to Hitler’s ban.

“As a form of punishment, Jews [in the East] were forced to clean churches and streets, occasionally under the supervision of Jesuits,” Bernauer writes.

Later, he notes, “As the brutality of the military actions increased, some Jesuits came to realize that the war that had been considered a struggle against godless Communism had itself become a ‘crime against humanity.’ But perhaps that realization came too late.” 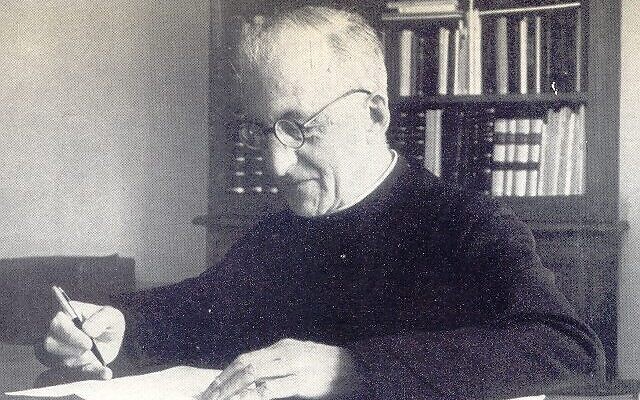 Jean-Baptiste Janssens, elected Superior General or head of the Jesuits in 1946, in this undated photo. (Public domain)

Bernauer finds solace in Jesuits who acted heroically during the war. Fifteen Jesuits have been recognized as Righteous Among the Nations by Yad Vashem. Bernauer credits Holy Cross Prof. Vincent Lapomarda, also a Jesuit, with finding the first nine and said that he himself found six more “quite by chance.” 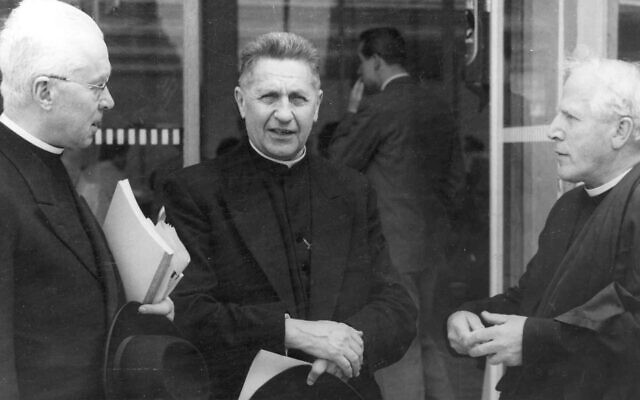 Augustin Rösch (center) was the wartime Jesuit Provincial of Bavaria and one of three Jesuits in the inner Kreisau Circle of the German Resistance to Nazism. He ended World War II on death row. (CC-BY-SA-3.0/ Ambrosius007)

Bernauer expressed a hope that more Jesuits will be considered as Righteous among the Nations, including Polish ones — “quite a few of them were executed, many more than any other country” — and regretted not having more about Poland in his book.

But, he noted, there’s enough material within its pages to promote more discussion and understanding.

“I think it’s important to convey to the Jewish community the fundamental change in Catholic attitudes, Catholic thinking,” Bernauer said. “Part of that change is rooted in a more critical understanding of our faith. It should be a Jesuit concern as well.”

Posted by yishmaelgunzhard on November 15, 2020 in Uncategorized