Back in 1620, the Pilgrim leader behind the 1st Thanksgiving was Hebrew-obsessed

William Bradford’s ‘Of Plymouth Plantation’ features about 1,000 words in the biblical tongue. But although many early Protestants studied Hebrew, they were hardly philo-Semitic

After leading the Pilgrims through a difficult first winter at Plymouth Colony and going on to help establish and govern the second successful English colony in North America, William Bradford penned an acclaimed account of his group’s early decades there. In the midst of the narrative are a number of pages written in Hebrew, out of place from the rest of the book — or so it would seem.

Bradford’s account, “Of Plymouth Plantation,” mostly follows the story of the Pilgrims, the nickname of the voyagers aboard the Mayflower who landed in present-day Plymouth, Massachusetts, 400 years ago in November 1620. But the author suddenly veers off to what appears to be an unrelated subject: his interest in Hebrew, which is reflected in lists of proverbs, numbers, months of the year and other words, all written in the letters of the Hebrew aleph-bet with their English-language equivalents.

Experts who spoke with The Times of Israel this week say this is actually not unrelated at all. They note that Bradford was a member of the Separatists, a Protestant Christian sect that broke away from the Church of England and which believed that the Bible was better understood in its original language, Hebrew.

The Separatists sought a refuge away from England where they could practice their version of Christianity, first in Holland and then in North America. Journeying on the Mayflower, they saw parallels with biblical Israelites en route to a new Jerusalem. Years after reaching that new Jerusalem, Bradford’s decision to add a Hebrew section to his manuscript looks like a significant, if overlooked, part of the Pilgrims’ journey.

Interest in Bradford has increased in recent years, including the release of the 2015 Ric Burns documentary film “The Pilgrims,” which is based on “Of Plymouth Plantation.” This year marks the publication of a new edition of the 1630-1651 journal, co-published by American Ancestors and the Colonial Society of Massachusetts. This edition includes Bradford’s Hebrew lettering in an appendix while providing what its publishers call an important new look at Bradford’s narrative. 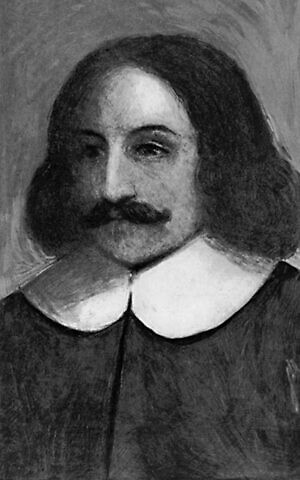 This portrait from a 1904 postcard claims to show the likeness of William Bradford. (Public domain)

Burns, an award-winning filmmaker who is part of a renowned documentary duo with his brother Ken Burns, told The Times of Israel that Bradford “is the key. He’s the first great writer of American history and [‘Of Plymouth Plantation’] is written by a man so central [to the establishment of Plymouth Colony].”

In addition to his leadership and literary exploits, Bradford represented a broader Christian interest in learning Hebrew that began decades before his time. The colonial leader summed up his interest in Hebrew — “that most ancient language, and holy tongue, in which the Law, and oracles of God were [written]” — in a paragraph shaped like an inverse pyramid.

According to Shalom Goldman, the Pardon Tillinghast Professor of Religion at Middlebury College, Bradford knew approximately 1,000 Hebrew words, including those for turtledove and cubits, as well as verses from the Tanakh, or Old Testament.

“[It was] not a lot of words,” Goldman said. “It was all about learning the Bible. Each of those words was a biblical word, of course.” At the same time, said Goldman, “I would not say he knew a lot of Hebrew.”

According to Goldman, Bradford had a lifelong interest in the language, as did one of his fellow passengers on the Mayflower, William Brewster. Goldman said that a Christian interest in Hebrew arose “only among Protestants” and was reflected in Hebrew primers, vocabulary lists and study groups. 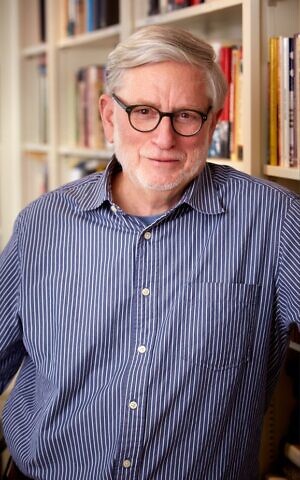 This Christian curiosity about Hebrew to better understand the Old and New Testaments was called “Hebraism.” Within Protestantism, such views were further embraced by sects including the Puritans in England.

Jonathan Sarna, the Joseph H. and Belle R. Braun Professor of American Jewish History at Brandeis University and the director of its Schusterman Center for Israel Studies, said that many of the Puritans, “like other Protestants, what are called Christian Hebraists at that time, wanted to be able to learn Hebrew in order to be able to read the Bible in the original.”

“It was especially true of Puritans,” Sarna said. “Many of them had… suspicions about extant translations. They did not want the King James Bible,” which was first published in 1611.

Many also did not want to stay in England. In 1620, the Separatist group to which Bradford belonged, having formerly lived in the Netherlands, now sought a haven across the Atlantic. 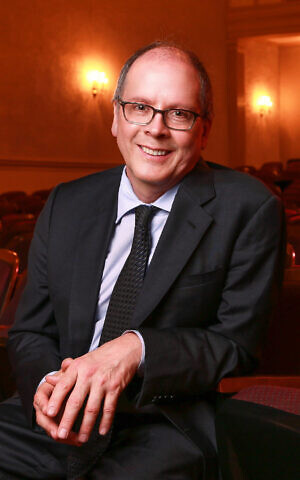 Filmmaker Burns said that their goal was to “find a tiny piece of heaven on earth” where they could worship in the manner of Jesus Christ and his original followers.

The journey to the New World began in September 1620 and lasted two months. Burns connected it to the concept of “pilgrimage” found in Judaism, Christianity and Islam. It is, he said, “The idea that the journeys we make in the temporal world — to Mecca or Medina, to the holy places in Jerusalem, to the temple on the mountain — to the New World to look for heaven on earth — are at once a physical, temporal thing, and also a spiritual one.”

Arguably the most famous pilgrims in history, the Mayflower passengers believed they were sailing to a new Jerusalem.

“It was very much the Christian understanding of the Judaic tradition,” Burns said. “The Jerusalem of the Hebrew Bible was not left behind. It was recapitulated, synthesized into a renewed version of the congregation of Christ.”

Michael Hoberman, a professor of English studies at Fitchburg State University and an expert in Jewish American literature and culture, said the colonists believed they were a new generation of Israelites.

“They thought about themselves coming to a Promised Land,” Hoberman said. “It’s kind of a complicated scenario. On the one hand, America is a Promised Land to them. They equate [themselves] with the Israelites in this regard. It’s a place where they could attain religious freedom.

“It’s also a land of exile, another base of comparison they may have drawn with the Israelites. They went from home in England to a barren wasteland… that Bradford describes. Whether it was an exodus to a Promised Land or an expulsion to a land of exile, the parallel does hold,” said Hoberman.

Not your grandfather’s philo-Semitism

Sarna noted that such apparent philo-Semitism came with caveats.

“It’s important to remember it did not necessarily mean they were in love with Jews,” he said. “Indeed, many of the Puritans thought Jews should convert. They found nasty things to say about unconverted Jews.”

“It’s a reminder you could be deeply religious, you could learn Hebrew, be interested even in the culture of the Jews, without necessarily wanting living Jews, living and worshiping Jews, in your midst,” said Sarna 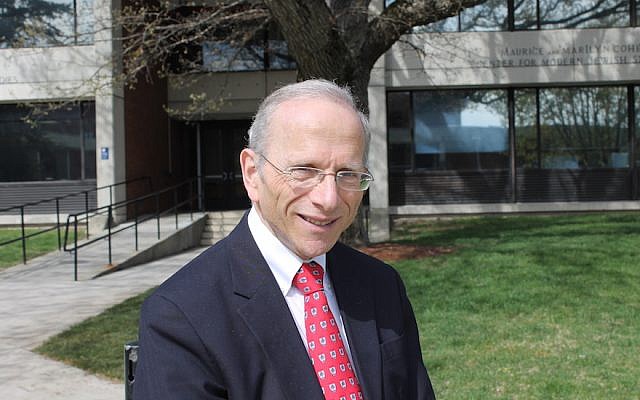 In what the Pilgrims considered their new Jerusalem, they were tested from the outset. They quickly lost half of their numbers to disease and harsh winter conditions. The casualties included Bradford’s wife, who died in a mysterious accident, as well as the first governor of the colony, John Carver. Bradford followed Carver in the top post and would serve on and off for the next few decades.

“He was governor, essentially, until he died,” Burns said.

Grim side to the Thanksgiving story

Bradford presided over a turning point in the young colony’s history. A local indigenous community, the Wampanoags, was facing pressure from rival communities and sought an alliance with the Pilgrims. The Wampanoags made successful overtures through three community members — Samoset; their chief, Massasoit; and Tisquantum, also known as Squanto. They taught the colonists survival techniques such as how to grow corn, and by the next November, Pilgrims and Native Americans celebrated what is now viewed as the first Thanksgiving.

Burns notes that there is a grim side to the Pilgrim narrative. They were able to land in Plymouth because a pandemic spread by previous European visitors had devastated the Native American population. A subsequent colonial venture led to the founding of another settlement near Plymouth called Wessagusset. When this settlement clashed with Native Americans, the Pilgrims launched a preemptive strike against the indigenous people, decapitating one of the leaders and displaying his head and a bloody cloth at Plymouth. 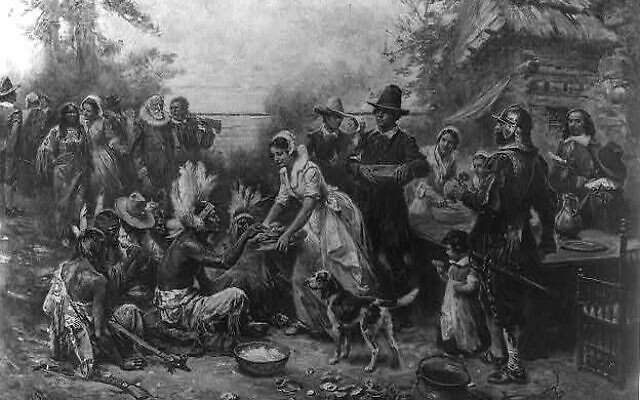 “It was the end of Native Americans in the entire New England [area],” Burns said. “It’s the other story to tell… To put it mildly, it’s not the story being told in school.”

Burns noted that the Pilgrims maintained an alliance with the Wampanoags in the early decades, a time in which the newcomers saved chief Massasoit’s life. The filmmaker lamented that the Pilgrims considered the pestilence that wiped out the Native Americans at Plymouth as a sign from God to establish a new Jerusalem there.

As for Bradford, by the 1640s he was disenchanted with the way his colony was heading and feared that its original spiritual mission was losing force.

“What drove them there fell apart,” Burns said. “People wandered away. It was a splintering of the original Plymouth colony. A body of pure faith was not going to be established. There’s a sense of a tremendous tragic quality to it, whatever one thinks about fundamentalist Christianity.” 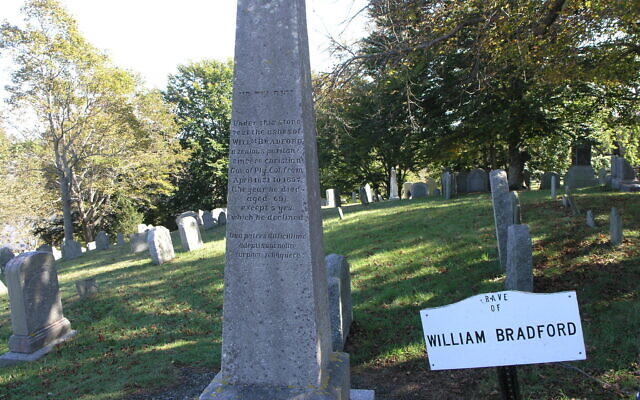 The grave of William Bradford on Burial Hill, in Plymouth, Massachusetts. The first line above the epitaph is in Hebrew lettering, and reads, ‘Jehova ezer chayii,’ or ‘God is the help of my life.’ (Public domain)

Burns noted, however, that out of Bradford’s “clear-eyed sense of failure of mission,” the former Pilgrim leader gained a new, late-in-life mission.

“With life closing in on him, he starts teaching himself Hebrew in Plymouth Plantation by candlelight at night,” Burns said. “It’s astonishing.”

Bradford even left a Hebrew inscription on his gravestone that Goldman translated as “God is my strength” and that has alternately been translated as “Jehovah is the help of my life.”

As taken from, Back in 1620, the Pilgrim leader behind the 1st Thanksgiving was Hebrew-obsessed | The Times of Israel

Posted by yishmaelgunzhard on November 26, 2020 in Uncategorized